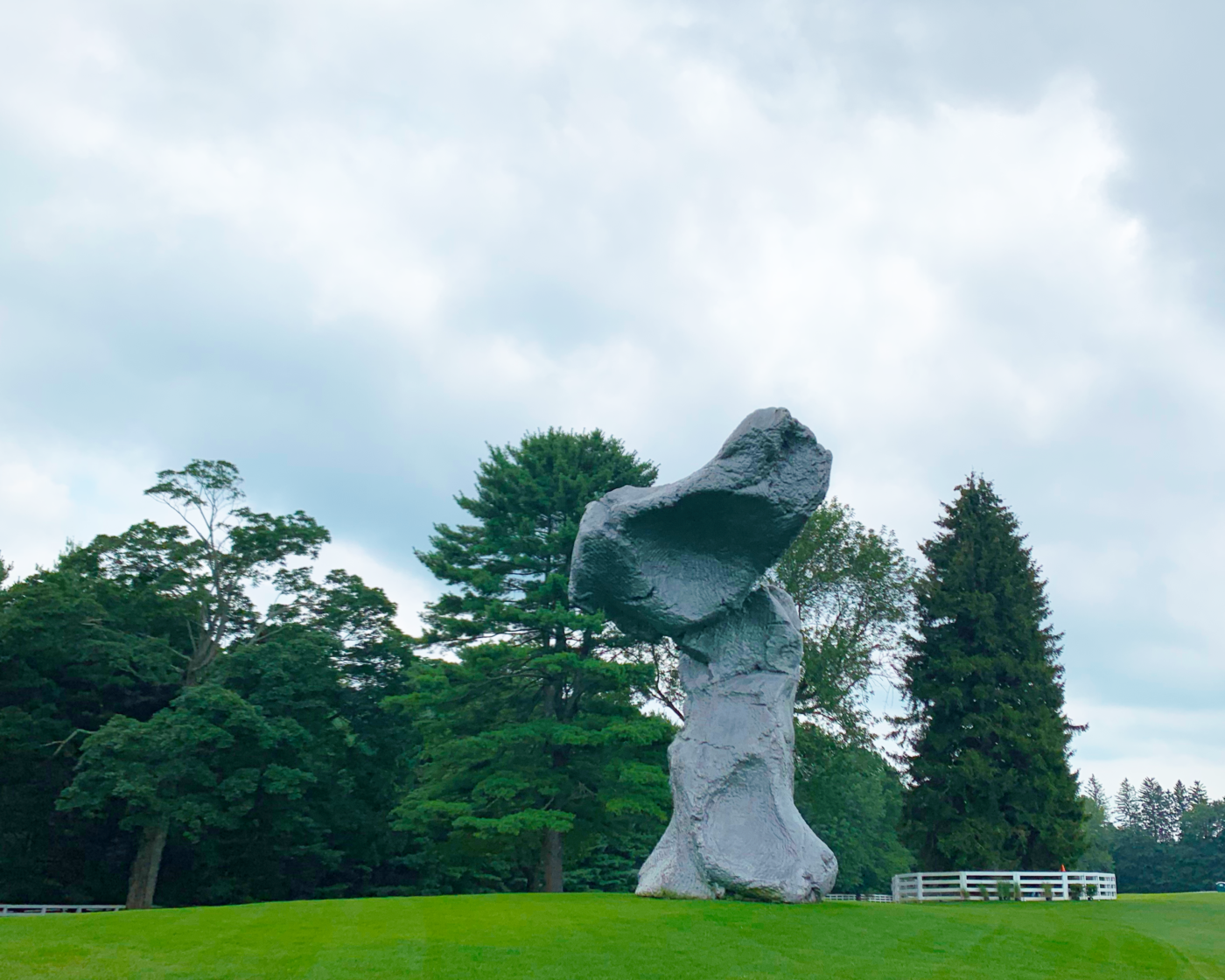 top image // Big Clay #3 by Urs Fischer at The Brant Foundation in Greenwich, CT, is a work of truly monumental proportions.

Summer is for sculpture.

August is the perfect time for a day trip to your local sculpture garden. You can enjoy even the doggiest days of summer without getting too sweaty. Considering how changeable climate is these days, it’s a bonus that moody weather can enhance the experience. Threatening clouds certainly did last week when I enjoyed a sultry afternoon at The Brant Foundation in Connecticut. They seemed fitting for Big Clay #3 by Urs Fischer, a monumental sculpture that commands the rolling grounds even when the artist’s work is not the focus of the exhibit, as it is now. As often is the case, the work was scaled-up from a small piece, this one gouged into form with his hands. The texture of the hollows are his fingerprints writ extra-large.

I still remember my first visit to a sculpture park. To bank some extra college credit, I signed up for the only summer course that looked bearable—Art in the 20th Century. At the beginning of the class, I was still addicted to the Impressionism I’d grown up with at The Art Institute of Chicago and had absolutely no use for modern art.

All that changed on a field trip to the PepsiCo Sculpture Gardens—which are still free and open to the public every April through October. The collection is sited on stunningly landscaped grounds and includes 46 works by modern and contemporary sculptors. I remember the exact instant that I “got” modern art. I was standing in the shadow of a massive sculpture by Alexander Calder. Hats Off is an enormous multi-legged, riveted steel structure that’s painted the artist’s signature bright red. Forged in 1969, the sculpture makes a Seinfeld-like observation about the social convention of removing one’s hat. It was a whimsical study in the whys and wherefores of deference at a time when authority was being radically taken to task.

To this day, Calder is one of my favorite artists. Originally trained as an engineer, he was one of the first artists to make abstract sculpture. Of course, he’s best known for inventing the kinetic form dubbed the “mobile” by Marcel Duchamp. With good reason, Calder’s legacy has become ubiquitous to all of us Western babies via the watered-down versions that hang over our cribs. The simplicity and movement in all of his works is simply magical.

Ever since that day when Calder woke me up, I’ve been obsessed with 20th and 21st-century art. But mainly I’m obsessed with sculpture. Not many people are up for an installation of five life-sized bodies hanging from their dining room ceiling. In my next column, I’ll fess up to the rest of the sculpture that dominates my apartment. 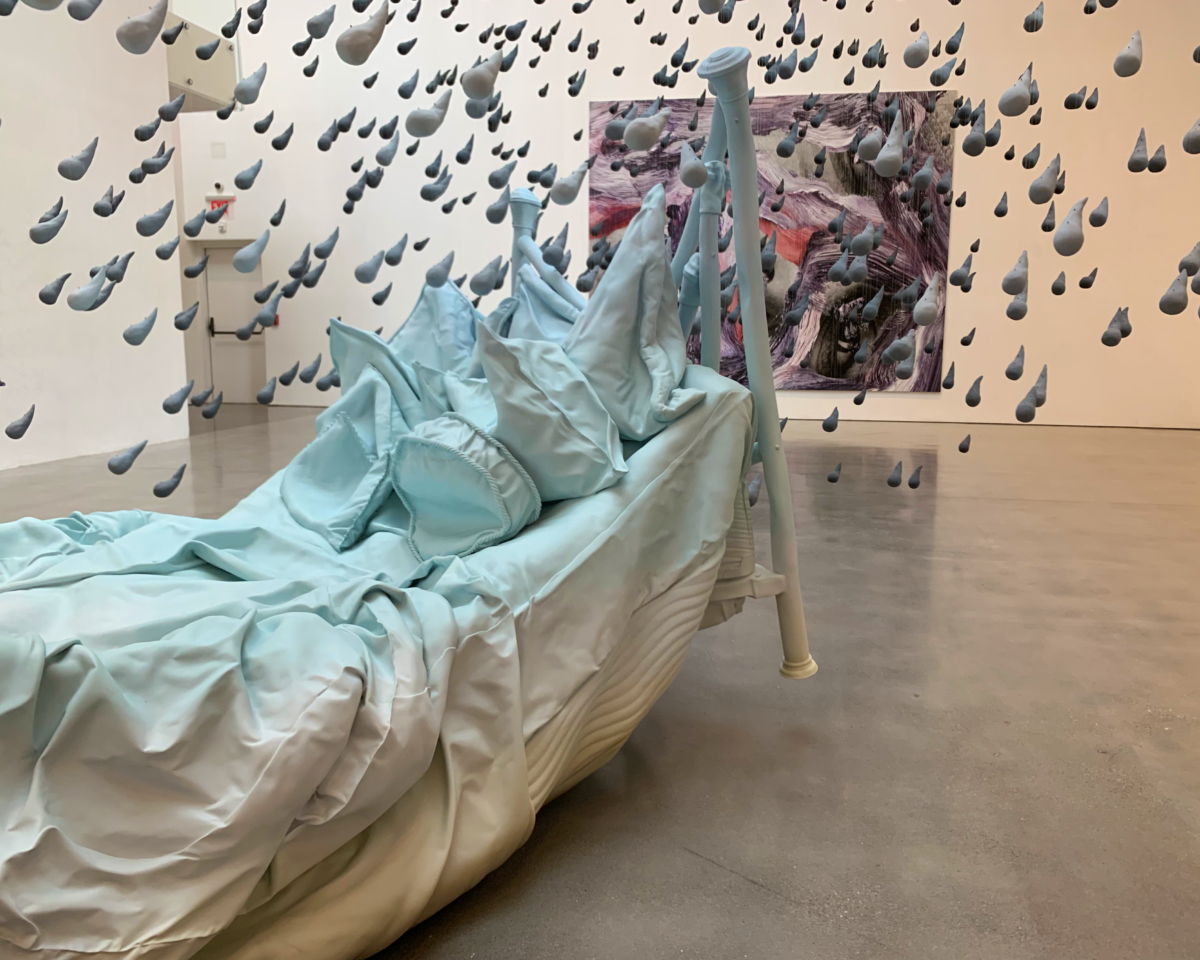 Urs Fishcher’s why do you hate me? i never helped you, 2018 brilliantly curated in tandem with Untitled, 2011.

For me, the three-dimensionality of sculpture gives it more presence than any other medium and that effect is exponential for freestanding works. Sculpture confronts you. It takes up space and gets in your way. Unlike two-dimensional art, sculpture is hard to ignore because you have to interact with it. That physicality means that sculpture packs a harder punch.

Nowhere is that more striking than in the lovely Urs Fischer show at The Brant. The star of the exhibit is a brilliant stroke of curation that combines the two works in the photo above. Fischer made them seven years apart. No doubt, the 3,150 plaster raindrops that make up why do you hate me? i never helped you would make a dramatic statement on their lonesome. (Check Insta for images of the full installation—it’s massive.) But the impact is supersized by the onslaught of the “storm” mauling the bed. Standing next to the crumpling headboard directly in its path, Fischer engulfs you in the fury of nature and it’s literally breath-taking. 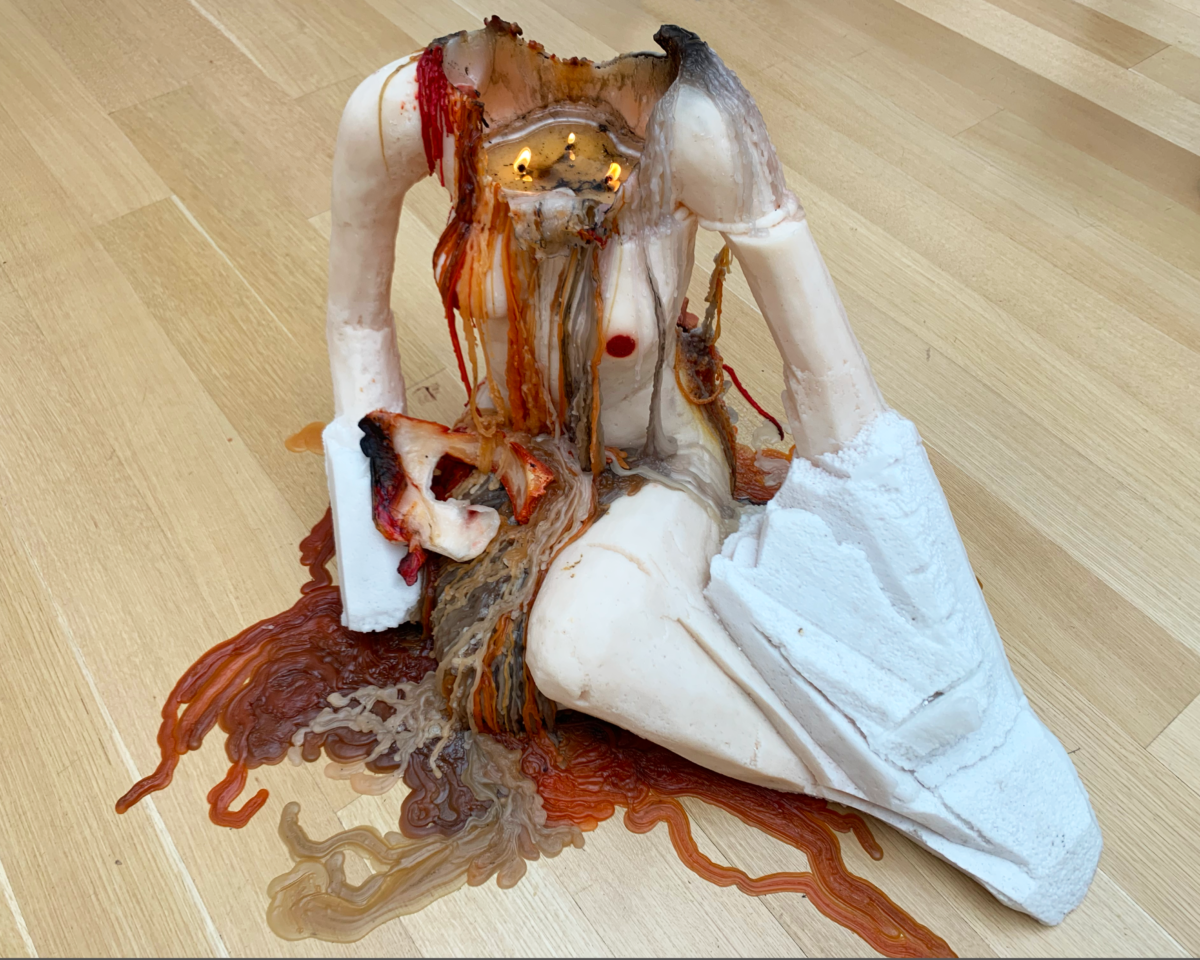 I was first enraptured by Fischer’s sculpture in 2011 at the most influential of all art exhibitions—the Venice Biennale. All his works there were wax sculptures. Not of the Madame Tussauds variety (god forbid). Wax isn’t a gimmick for Fischer—it’s integral to the work. I can’t say it better than the exhibition curator, “In Fischer’s works, the meaning lies within the very substances and processes of its making, whereby ideas become material and materials take on a life of their own.” That, my friends, is deep.

With a genius wick-system, Fischer often engineers the heads of his figures to fall off first. They either shatter, leaving what’s left of the above sculpture’s head cradled in her arm, or they lay whole at the feet of their decapitated body. I was a little surprised by the crudeness of the cartoonish female nudes at the Brant. The artist’s work is normally gorgeously executed, and I don’t dig the gratuitous, but I wasn’t disappointed. The What if the phone rings series calls out outdated cultural stereotypes of women as vapid, sexualized objects helplessly waiting for men to call. Fischer’s material does indeed make his meaning here. He’s railing against the idea that women would be so lame as to allow their own agency to vanish.

Like all good sculpture, Fischer’s wax works provoke a visceral reaction—maybe doubly so because they’re lit (double entendre intended) and they’re literally melting away. You’re torn. You want to watch them burn. That’s the point. But still, their burning means their demise. It’s hard to watch art die. 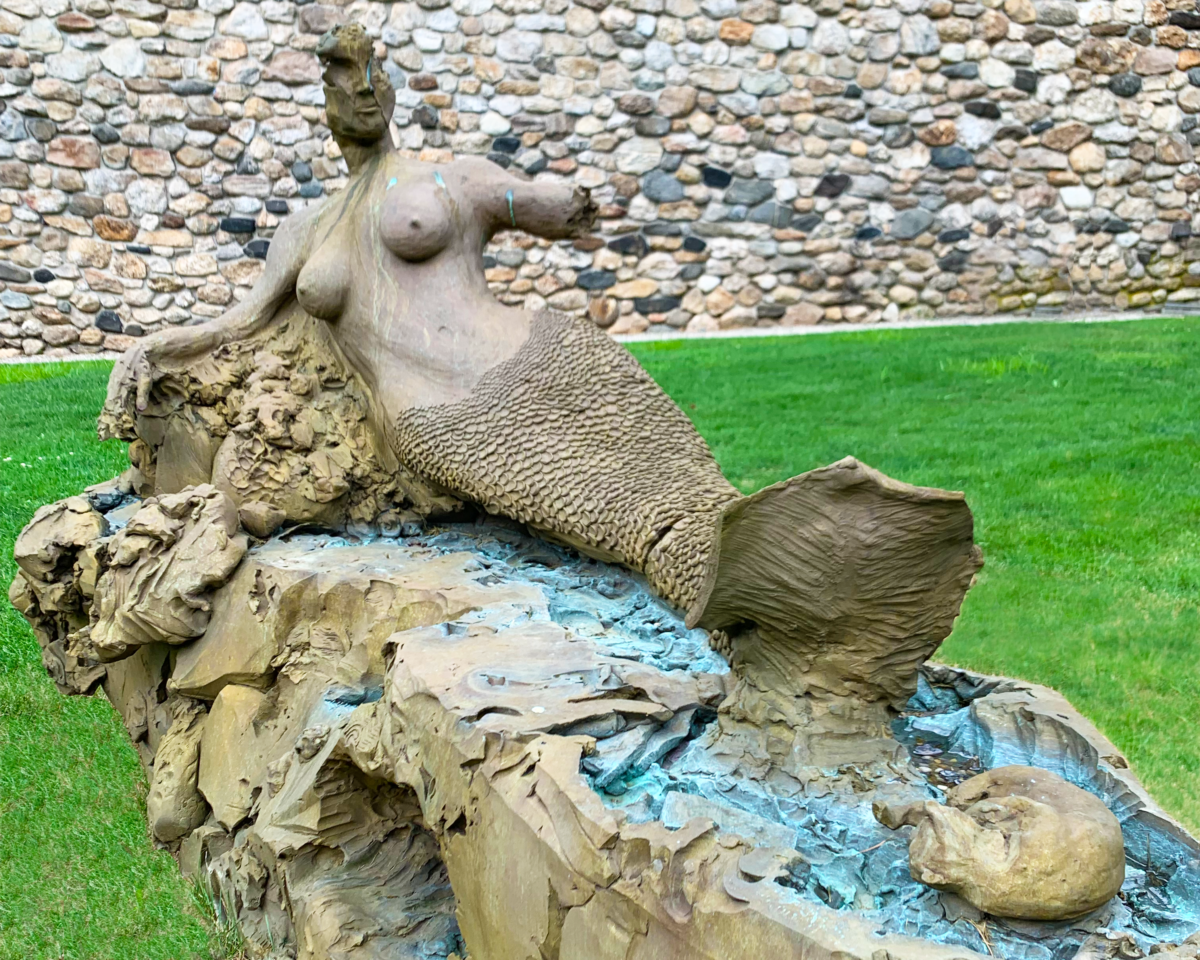 If you want to get your August on with sculpture and you’re in the NY-metro, you’ve got tons of options.

If you definitely want to be outdoors, there’s PepsiCo in Purchase and Art Omi in Ghent. PepsiCo is a survey of modern masters, while Art Omi is an amazing collection drawn from their unparalleled residency program (dubbed by their 2018 residents as #artomigod).

If you want to be able to escape the heat for a while indoors, too, Storm King Art Center in Mountainville and The Brant have galleries as well as outdoor works. The Brant, in Greenwich, is only an hour from the city. But Storm King has a much larger collection of outdoor works on 500 acres that you can tour either walking or, more fabulously, biking. You can even rent bikes there.

If the weather is nasty, DIA Beacon is showing minimalist sculpture by Charlotte Posenenske. Not only is the exhibition all indoors, but they have a reduced price One-Day Getaway deal with Metro-North and a free shuttle bus from the train to the museum.

Jobs in the Art World: Anita Durst, Founder of Chashama