David with Goliath’s Head by Caravaggio at the Kunsthistorisches Museum in Vienna.

The fall art fairs are here again. For years, I’ve powered through their endless stalls until I fell into the inevitable art coma. Like most fairgoers, at first, I was amazed by everything I saw. The fairs are a great way to expand the image bank inside your head. By seeing such an enormous amount of art in a very short time, your eye improves exponentially. You start to separate the gems from the dross. That’s the point.

Unfortunately, the proportion of dross to gems has gotten overpowering. “Art-fair art” has become a thing—beautiful, expensive objects that pack no emotional punch. There are tons of boring reasons for this shift, like mega-galleries eating their own ecosystem…blah, blah, blah. But the fall fairs got me thinking about a much more fundamental reason for the rise of “art-fair art:” a drastic change in the relationship between art and beauty.

From antiquity until about a hundred years ago, beauty was a constant in fine art. Even when the subject was especially grisly, like Caravaggio’s David with Goliath’s Head (above), it was so beautifully represented that you couldn’t help but marvel at it. The light that illuminates David is rapturous. His simple shepherd’s garments drape majestically, and the righteous determination on his young face is palpable. Although Goliath’s head, grasped pitilessly by the hair, is in the forefront, the artist downplayed its gruesomeness. No bloodstains David’s sword, and the gore of the flesh he just severed dissolves into the shadows. Renaissance painting might not be your jam, but there’s no denying that this painting is sublime.

It’s magical when an artist renders something horrific so gorgeous that we’re drawn to it rather than repulsed. Billy Eilish’s new pop song, Bad Guy (which I’m completely obsessed with), does this flawlessly. The hypnotic beat and incredible vocals wrap chilling lyrics into an exquisite package. Eilish even admits it in the song:

If Eilish’s song wasn’t so yummy, none of us would listen to it. In music, appealing aesthetics are still a must. (The exceptions, like punk, death metal, and John Cage, just prove the rule.) The marriage of art and beauty still holds for all the other arts, too. Only visual art has divorced them. If a contemporary artist wants to draw attention to something ugly, they very often make something just as repugnant. 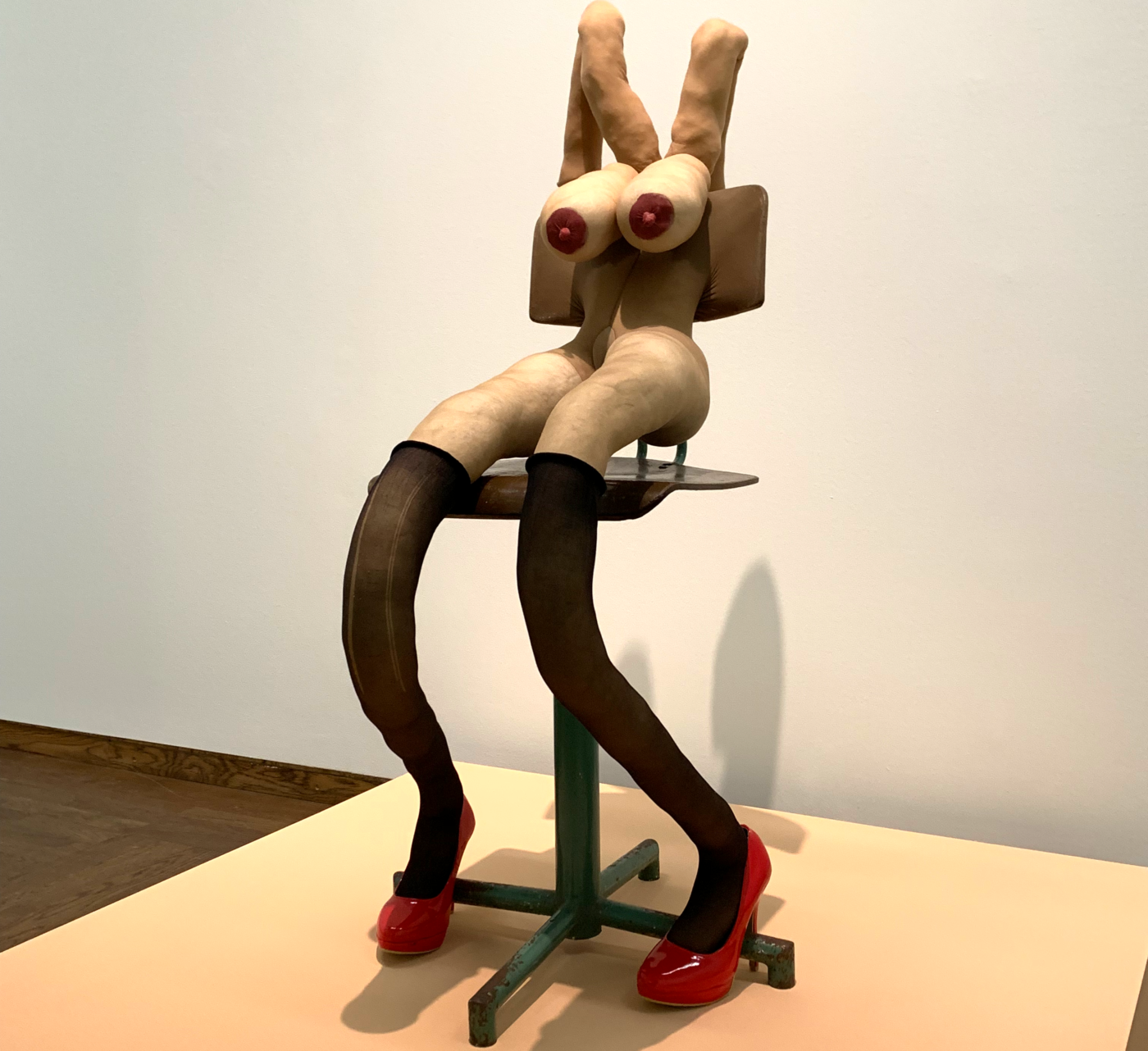 Tracey by Sarah Lucas at the Leopold Museum in Vienna.

YBA (Young British Artist), Sarah Lucas’ work is a perfect example. You likely saw some of it on social media this past summer while Lucas was having a big retrospective at the Hammer Museum in LA. She’s most known for her grotesque, anthropomorphic figures. They’re often aesthetically hideous because Lucas is questioning traditional thinking about gender, sexuality, and identity. She makes bawdy, irreverent images out of found and everyday objects. In Tracey, the sculpture above, she confronts us with a misshapen female nude/chair. In addition to the sexual trappings that can objectify women (red f*ck-me stilettos, black thigh-high stockings, and prominently displayed breasts), she literally turns the nude into an object you could sit on and use. Oh, yeah, and it’s headless…yikes.

It’s hard to imagine how Lucas could communicate the same complicated feelings that Tracey evokes if she’d made a beautiful image. The ugliness of this work is intrinsic to its power. She’s saying that, as a woman, she refuses to be just a sexual object. In the Trump/#metoo era, her work is more relevant than ever.

How can Lucas, who’s recognized as one of the most important contemporary artists, get away with divorcing art and beauty, while Eilish can’t? Blame it on, or better yet, thank the influence of Marcel Duchamp. 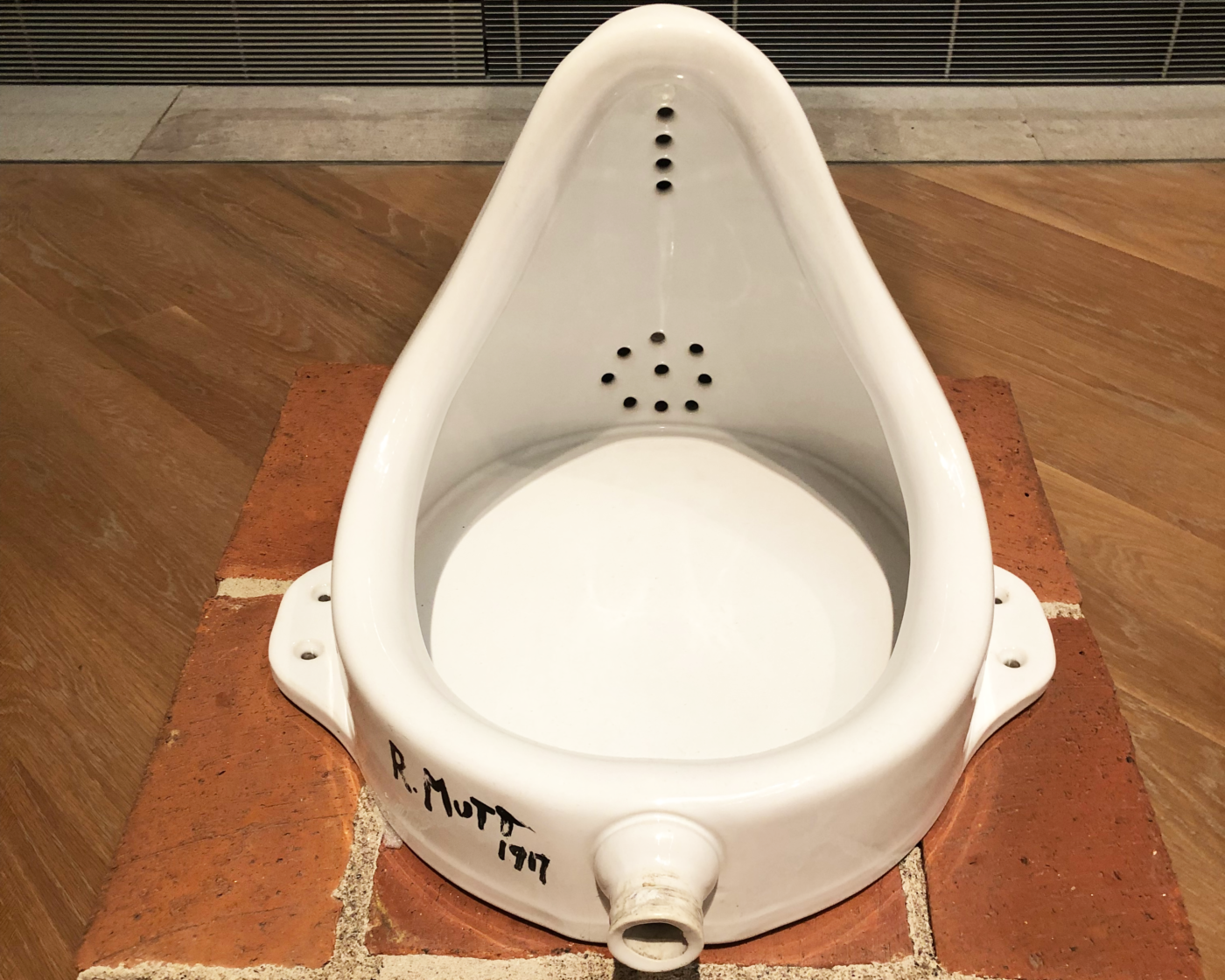 One of several authorized replicas of the Fountain attributed to Marcel Duchamp, but possibly originally made by a female artist in his circle. Moderna Museet in Stockholm.

In visual art, the constant of beautifully representing even the terrible began to erode in the early 20th century. Artists like Marcel Duchamp started exhibiting works that completely defied the requirement of appealing aesthetics. In fact, they were often purposefully downright unsavory. In 1917, Duchamp, (or one of the women artists in his circle—nobody knows for sure) first tried to exhibit the Fountain under the pseudonym R. Mutt in a New York show. The original wasn’t a sculpture in the traditional sense. It was what has become known as a readymade—an ordinary mass-produced urinal turned onto its side and exhibited on the floor (instead on hung on a wall). Yep, a urinal.

In the Fountain, as described by Beatrice Wood in a contemporaneous art journal, the artist “took an ordinary article of life, placed it so that its useful significance disappeared under the new title and point of view” and in so doing “created a new thought for that object.” The Fountain redefined art as a concept instead of just an object. That brilliant broadening of what art could be made it the single most influential work of art in the 20th-century.

Yep, a urinal is the single most influential work of 20th-century art. This is why my mother is so baffled by contemporary art. The Fountain’s legacy blew the idea of what art could be wide open. Artists, like Sarah Lucas, were freed from any of beauty’s constraints, allowing them to communicate the whole range of human emotions.

The problem, of course, is that most of us don’t want to live with ugly stuff. Neither urinals nor disturbing nudes. We want our homes to make us feel good. There’s nothing wrong with that. I’m a huge advocate of using art to create the mood you want to be in. (See my column Why Art? Part II.) But the divorce of art and beauty means there’s a growing chasm between the aesthetics of important art and the art that people want to live with. “Art-fair art,” with its empty beauty and exorbitant price tags that suggest high value, has rushed in to fill that gap.

My point isn’t to demonize the love of beautiful art or art fairs. If you only want beautiful things—go for it. But if you want to bring home real art, not just decoration, don’t be swayed by the brush strokes alone. Look for beautiful art that still packs an emotional gut punch—even if that punch is such beauty that it truly takes your breath away. It’s out there. You just have to work harder to find it.

Holly Hager is an art collector and patron. Previously an author and a professor, she now dedicates herself full-time to help artists make a living from their art by making the joys of art more accessible to everyone.

Our 12 Favorite Booths at The Affordable Art Fair

The Intersection of Fashion and Art: Exhibits to See in 2017