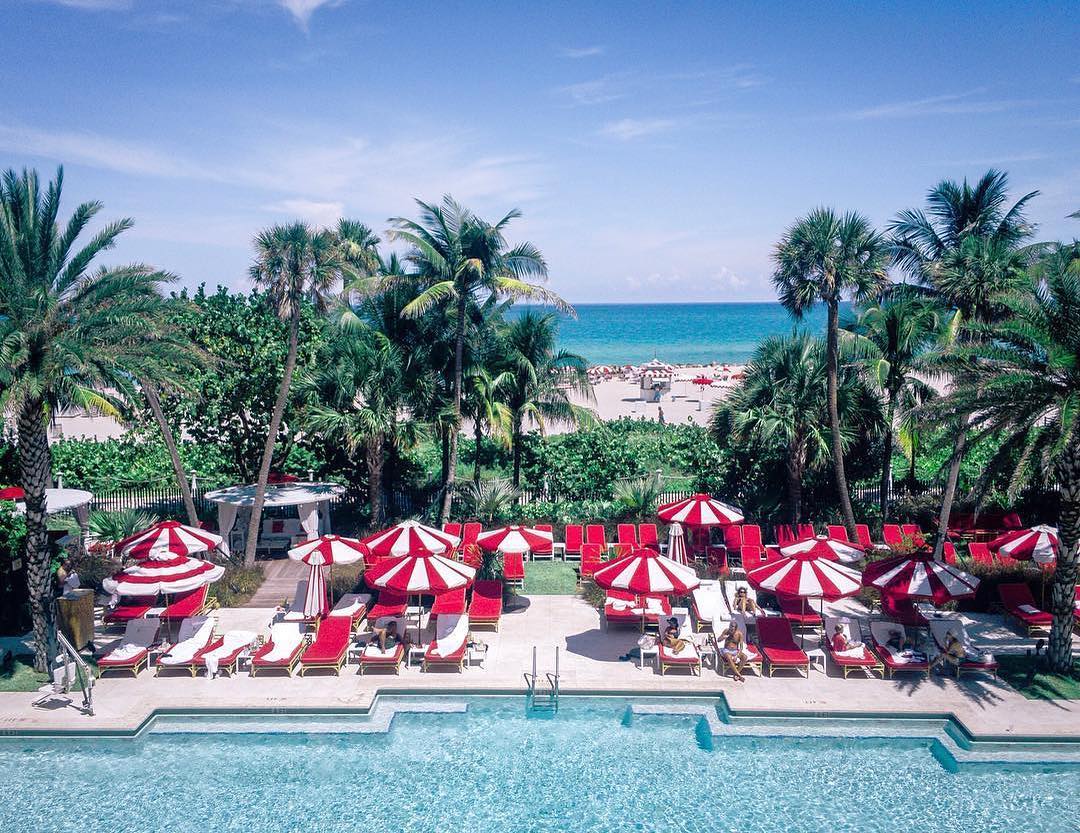 Art Basel Miami Beach 2017 is just days away and the art world will once again descend upon the city of Miami. Most fairs open December 7th, which leaves you plenty of time to check out the cultural experiences taking place throughout the city. With hundreds of events happening, our editors narrowed it down to 40 we’re really pumped for. From star-studded galas to fashion cocktail parties, most are open to the public unless marked invite only. We’ll be adding more events as they come, so watch this space. Check out our food and bar guide. Download our Art Basel playlist while your at it

1. The ICA Ribbon Cutting Ceremony + Opening Day will be taking place just before most people head down to Miami. The Museum will be hosting tours and special events throughout the week, so make sure to stop by! 61 NE 41st St, Miami

2. Sagamore Hotel Miami Beach returns to Miami Art Week for the 16th year, celebrating its claim to fame as a “hot-spot” for artists, collectors, and exhibitors from around the globe. This year, the hotel will continue the tradition with its ongoing series #SagamoreisArt, presenting URBAN LEGENDS, a curated selling exhibit showcasing the works of iconic and emerging urban artists that will remain on display from December 4, 2017 – January 4, 2018. 1671 Collins Ave, Miami Beach

3. Surface Magazine is teaming up with chef Daniel Humm and his team from Eleven Madison Park to create Surface x EMP Experience for a two-day, invite-only lunch and dinner series on December 4th and 5th.

4. The Hole Gallery and Tara Subkoff will present an all-female performance entitled “Doe a deer a female deer in the head lights and other cliches that are real” at everyone’s favorite Art Basel hotel, the EDITION on their Tropicale Lawn on December 5th at 8PM. Invite only. 2901 Collins Ave, Miami Beach

5. White Wall and Vilebrequin will be taking over the Nautilus pool on December 5th from 6-8PM. Drinks by Chateau d’Esclans, Whispering Angel. #roséallday

7. The Prada Double Club, a Carsten Höller project, will be happening December 5th through December 7th. Invite only.

8. On December 4th, enjoy free admission to both the Pérez Art Museum Miami and the Phillip and Patricia Frost Museum of Science, plus performances by Knight Arts Challenge winners and more. Jam to live musical performances by Spam Allstars, Locos Por Juana and Afrobeta. Free with RSVP. Knight Plaza – between PAMM and Frost Science, 1103 Biscayne Blvd.

10. Vanity Fair & Genesis will be hosting a dinner honoring Bruce Weber on December 5th at 7:30PM at Forte dei Marmi. Guests will enjoy Perrier-Jouët and hopefully some of Forte dei Marmi’s truffle pasta. Invite only.

12. Jeffrey Deitch and Larry Gagosian are back with Present Abstract/Not Abstract. This will be the third thematic exhibition to be presented in the Miami Design District during Art Basel Miami Beach by Larry Gagosian and Jeffrey Deitch. The December 2017 exhibition will explore contemporary approaches to abstraction in painting. Abstract/Not Abstract will include work by the greatest artists working today who redefine abstraction for our time. December 5 to December 9 – 11:00 a.m. to 8:00 p.m. Sunday, December 10th – 12:00 p.m. to 6:00 p.m. 191 NE 40th Street. There will also be a cocktail event at Moore Elastika which is invite only.

13. Prada is having a dinner at Ice Palace Studios on December 5th hosted by none other than Muccia Prada. Invite only. 59 NW 14th St, Miami.

14. On December 5th, there will be a lunch in honor of the Daniel Knorr newest sculpture Bonhomme Universe at Jade Signature, a Herzog & de Meuron building with CULTURED Magazine. December 5th, 11:30AM, invite only.

15. The Vibram Sole Truck, a 38-foot mobile cobbler shop that upgrades footwear with a Vibram sole, will be in the Design District’s Jungle Plaza, December 5-6 from 1-9pm. Guests can have their favorite pair of footwear upgraded for free with Vibram. There is also a private event happening on December 4th from 6-9 PM. 3801 NE 1st Ave. in Miami’s Design District.

16. Head to the Faena hotel from 9 p.m. to 2 a.m. on December 6th and look up for a swarm of drones by Amsterdam-based duo Studio Drift initiated by BMW. Date and time are subject to change due to weather.

19. Luminaire, in the Design District, will play host to two events. On December 6th, they will host the launch of Cassina’s monograph, This Will Be the Place, a book in honor of the brand’s 90th anniversary that explores the future of domestic design. RSVP here. 4100 NE 2nd Avenue, Suite 104. On December 7, Luminaire Lab will open its latest exhibition on Shiro Kuramata, featuring a collection of unique pieces that highlight his abundant creativity and sensitivity to form, including works that are a part of the permanent MoMA Collection. Select pieces that are included in the Cappellini collection will also be on display. RSVP here. 3901 NE 2nd Avenue.

20. Sant Ambroeus x Superga will celebrate a collaboration launch during Art Basel at The Rooftop at The Webster on Thursday, December 7th with music by Harley Viera-Newton. Invite only. 1220 Collins Ave, Miami Beach.

21. W Magazine and Oliver Peoples will celebrate The Next Wave of collectors in art, fashion, music and design in Miami on December 7th at The Nautilus Hotel Tent, 1825 Collins Avenue. Invite only. You can also check out Oliver Peoples newest store when it opens December 4th at 30 NE 40th Street, Unit 130.

24. Patricia Field is celebrating her ARTFASHION Opening Night with a gallery exhibition and pop-up shop featuring a curated selection of one-of-a-kind clothing, accessories, and art. There will also be sculptures by Kyle Brincefield, Scooter Laforge, Jody Morlock, Suzan Pitt, Steven Wine and Iris Bonner. The launch party will take place at the White Dot Gallery on December 7th, from 7 to 9PM.

26. Marco de Vincenzo and The Webster will host a cocktail to celebrate the exclusive collection in collaboration with the artist, Agostino Iacurci on December 7th from 7 to 9 pm at The Webster Hotel. Invite only.

27. It’s not Art Basel unless Moschino throws a party. This year they will be taking over Eden Roc on December 7th, and as per, it’s invite only.

29. Sin City arrives in Wynwood during Art Miami with an experiential art gallery. LVCVA (Las Vegas Convention and Visitors Authority) has partnered up with five internationally-renowned artists to share their interpretations of Las Vegas in a 360° virtual reality art form after their visits. Zadok Gallery, 2534 N Miami Ave. On view December 7- December 9.

30. American Express is offering a boatload of perks for its premium Card Members in Miami Beach from December 7th through 10th. Some perks include: Access to their Platinum House at The Miami Beach EDITION which includes things like curated food & beverage, beauty services by MILK Makeup, Ouai and Paintbox, custom merch by Knowlita and musical performances. Card Members will also have the chance to experience an artistic dining collaboration with José Andrés at the SLS South Beach Hotel. Event proceeds will be donated to World Central Kitchen’s mission in Puerto Rico and other areas.

33. On December 8th, the Museum of Ice Cream lands in Miami at Faena. The Sunset Soiree will include music, drinks, sweets and swimming in the sprinkle pool. Invite only.

34. On December 9th, Artsy and Lehmann Maupin will co-host a conversation between Fernández and Artsy’s Curator-at-Large, Matthew Israel in celebration of Teresita Fernández: Wayfinding, the artist’s first major monograph on the Matador Terrace at the EDITION. Invite only. 2901 Collins Ave, Miami Beach.

36. The Nautilus Hotel, hosts an exhibition of paintings by Paul Sevigny — followed by a party with Sevigny DJing — on Friday, December 8th at 9:00- 11:00PM. 1825 Collins Avenue. Invite only.

41. On December 7th, The National YoungArts Foundation and ONE Sotheby’s International Realty  will host an exclusive brunch and tour at the Jewel Box at YoungArts to officially kick off the 16th edition of Art Basel Miami Beach for the fair’s VIP ticket holders and YoungArts special guests. Guests will be treated to breakfast and libations with private gallery tours of the YoungArts alumni exhibition, IMAGINATION LAND: Fantastical Narrative, curated by Derrick Adams, followed by an intimate design conversation with Simon Haas in the Jewel Box. 2100 Biscayne Blvd, Invite only.

42. The LOEWE FOUNDATION will present Chance Encounters series, bringing together artists from various disciplines in order to explore unexpected conversations. This year works by Sara Flynn, Richard Smith and Lionel Wendt are presented within the unique space of the LOEWE Miami Design District.  For “Chance Encounters III,” on view from December 4 – February 4. There is an invite-only event happening on December 5th. 110 NE 39th St, Miami

43. Artsy Projects Miami will take over the historic Bath Club in Miami Beach on December 7th with immersive installations that draw on found materials and sculptural forms to explore tensions and anxieties of today’s culture featuring new works by FlucT, Samara Golden, Jillian Mayer, and Maria Nepomuceno. Performances will take place at 1:00pm and 4:00pm. You can RSVP here. There is an invite-only event happening the night before that’s sponsored by Gucci. 5937 Collins Ave, Miami Beach

Are These Corcoran Students the NEXT Big Artists?