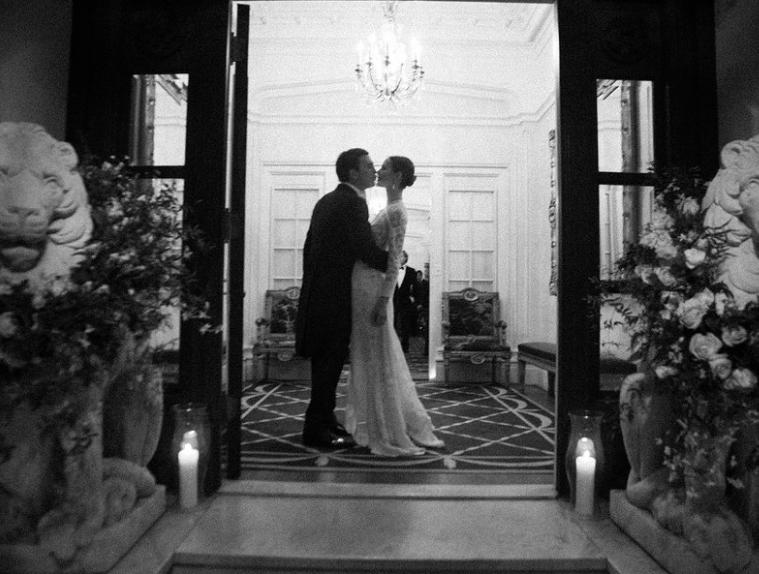 In honor of our Co-Founders upcoming nuptials, we’ve come up with a list of some of the most influential couples in the art scene all the way from the Renaissance ’til present day who have tied the knot.

Although matrimony was out of the question for these two, many believe that their affair was very real. The stunning model, Gherardo Perini, swooned the great Renaissance artist, Michelangelo, after he came to work for him around the year of 1520. Perini became his muse, inspiration, and even a source of anxiety and distress.

Shown above with their beloved terriers, Ned Warren and John Marshall were generally considered the most important collectors of classical antiquities in American History. They not only formed a partnership to scout, purchase and broker the sale of antiquities, but also a loving partnership that made them the ultimate power couple. Eventually, Warren and Marshall controlled the art market at the time and got first pick on anything that came out!

These two celebrated figures in the art world were married in 1924. By then, O’Keeffe was already considered one of the US’s greatest painters! On the other hand, Stieglitz’s legacy was nothing short of impressive as he was instrumental in making photography an accepted and appreciated art form!

This couple gained international popularity for their emblematic Mexican art. Although being considered Mexico’s greatest artists for his socially aware murals, Diego Rivera insisted that his wife’s work was superior to his! This tumultuous relationship was as passionate as it was intense until Frida’s early death at the age of 44, which left Diego inconsolable.

This husband-wife design team met and married in 1941 when Ray helped Charles with designs for his entry for the MoMA’s organic furniture competition. Their collaborative practice made significant contributions to modern architecture that resonate until today!

Married in 1943, Elaine helped promote Willem’s carrier and in return, he gave her drawing lessons that helped her become a fine portraitist. Although Elaine’s career is often overshadowed by her husband’s, there’s no doubt that her influence in the art world is significant; being considered one of the most important art teachers in the 20th century.

The pair met when they exhibited at the same gallery in 1942. At the time, Krasner was more widely known than Pollock, but as per usual, her career as an artist was often compromised by her role as a wife to the painter who tossed paint at canvases with a stick. During the Abstract Expressionist era, Pollock became the most significant postwar American painter.

Although they kept their relationship private, Rauschenberg and Johns were lovers for six years of which they greatly impacted each other’s works. With Rauschenberg’s radical blending of materials and John’s revolutionary breakdown of traditional boundaries that separated fine art from everyday life, the duo set the stage for the Pop Art movement’s aesthetic and influenced many artists after them!

This infamous couple needs no description. The picture above shows artist Yoko Ono and The Beatles co-founder John Lennon on their honeymoon, titled “Bed-In for Peace” at the presidential suite of the Hilton Amsterdam. Being a pioneer in performance art, Yoko Ono sat in bed with her husband for a week and invited the global press into the room to discuss peace for 12 hours every day!

Being leading personalities in the art world today, Amalia Dayan and Adam Lindemann tied the knot in Jerusalem in 2006. These prominent art collectors, art dealers, and influencers are at the head of Luxembourg & Dayan Gallery and Venus Over Manhattan Gallery, and they are also the owners of Andy Warhol’s estate in Montauk.

The couple met in London in 2007 and were secretly married for months before announcing their matrimony in 2010. Schwimmer is widely known for his role in the TV series Friends and his wife is not short on talent either; being a photographer and artist, she recently exhibited her work in NYC at Jack Shainman Gallery.

American contemporary artist Tom Sachs married saleswoman and artist liaison for the Gagosian Gallery, Sarah Hoover, in her hometown of Indianapolis. After meeting on the phone in 2007, Sachs was intrigued by Hoover’s sass and they’ve been enjoying their time together ever since.

The Brooklyn-based superwoman and art connoisseur married celebrity stylist Jordan Blackmore in a beautiful desert wedding in Utah. The couple merged their talents and co-founded Three Squares Studio, a hair salon that doubles as a gallery space, which is the second gallery of two owned by Potamkin, the first being the Kasher Potamkin Gallery in Chelsea, NYC.

Infidelity is the least of this British artist’s worries when it comes to her hubby. Tracey Emin has dedicated her whole life to her art and as her latest exhibition opened in Hong Kong. But let’s not forget the time she announced she married a stone in her garden in France. Love has it’s funny ways…

The Quogue Gallery Presents Art on Paper Gallery Talk: “The Pinajian Discovery: Bringing the Forgotten to Light and Establishing Value.”