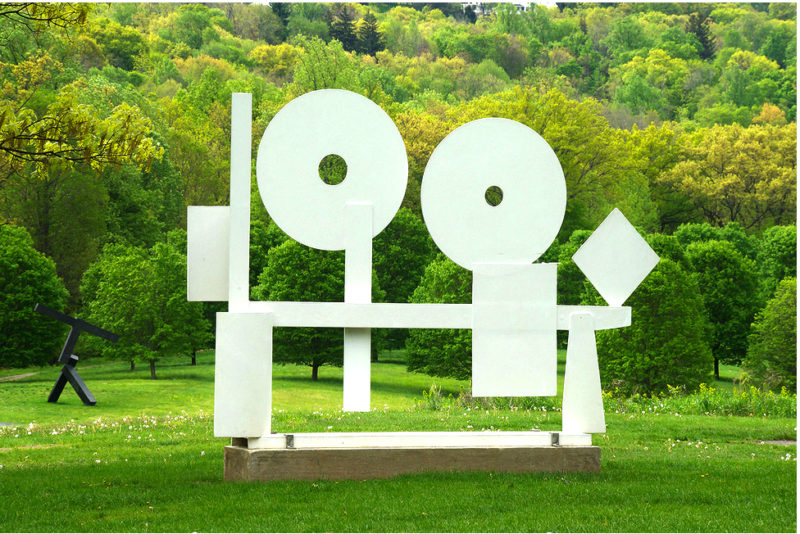 If you’re looking for something to do this Memorial Day weekend, Storm King Art Center officially opened two special exhibitions for the 2017 season, Heather Hart’s The Oracle of Lacuna and David Smith’s The White Sculptures.

Outlooks, in its fifth year, is an initiative in which one emerging artist is chosen to create a site-specific sculpture inspired by Storm Kings environment or history. The installations are temporary and last only one season. Heather Hart’s The Oracle of Lacuna is a constructed suburban rooftop that appears to be either emerging from the environment or sinking into it.  The interactive sculpture was designed for the viewers to not only walk into the house, but to take a stroll on the roof.

Hart imagines the rooftop constantly being reinvigorated by music, movement, poetry, and other events. We were lucky enough to catch the Brooklyn-based duo known as Chargaux performing on the rooftop for opening day. The violin and viola playing duo met by chance a few years ago. They started their career the way many New York City musicians start: by playing in the city’s subway stations. The duo’s music and fashion senses quickly caught people’s attention and the duo now has two albums Broke and Baroque and Meditations of a G.

Smith owned an 86 acre farm in Bolton Landing, New York, about two and a half hours north of Storm King. He had his studio there and filled the fields with his sculptures, arranging them in rows like crops. Six of his white sculptures are dramatically arranged outside the Museum Building at Storm King. The Museum Building sits atop a hill with a great view of the surrounding area and Mark di Suvero’s sculptures in the lower fields. The galleries inside are exhibiting Smith’s smaller work and paintings so be sure to check those out; we found them to be the most interesting aspect of the exhibition. You can see the stylistic progression from his early work to the large steel sculptures represented by the outside exhibition.

Storm King Art Center is about an hour and a half drive from midtown Manhattan, and it’s the perfect road trip on a nice warm day.