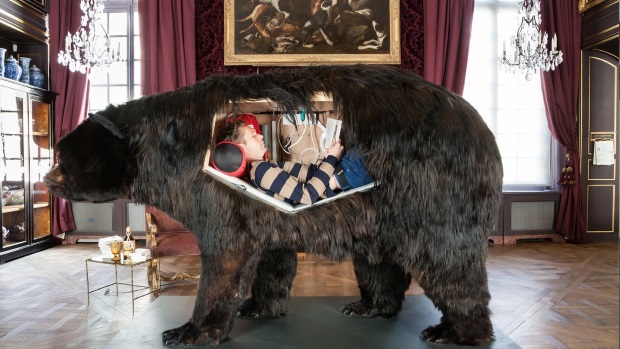 Performance art is notorious for being unpredictable. Many artists have been known for getting a little risky and wild in most performances and half the time people are left wondering: What just happened?! From strangers cutting off their clothes in public, and living in a bear carcass, to taking a naked stroll in the woods. Performance artists take risks and push boundaries and that’s when things start to get interesting – but also weird – and that’s what we love about it. Brace yourself, these are our favorite 9 wild moments in performance art:

1. The Artist Is Present

Have you ever seen anyone stare at hundreds of people in the eye for 736 hours? Next time you want to test the limits, try taking after Marina Abramovic who performed at the MoMA in New York in 2010. Her presence is unforgettable as multiple people broke down emotionally while looking into her eyes in this performance, The Artist Is Present.

Five girls in ski masks were screaming at the top of their lungs, playing guitar and putting on a show. All the while they were speaking to a much bigger issue. If you’ve never heard of Pussy Riot, their performance Punk Prayer in 2012 got everyone around the world talking about the group. They’re like the Russian Bikini Kill; punk rock protesters that support women/LGBT rights. They caused chaos and sparked a following as the world watched.

Two of the world’s most incredible women joined forces in this performance in 2013. Lady Gaga and Marina Abramovic are seen in this 2-minute performance where Lady Gaga demonstrates “the Abramovic Method”. Gaga yells wears a yellow mask, strolls naked through the woods and even cuddles a huge crystal in the performance. Meditative as it may be, the Abramovic method isn’t for everyone.

Tehching Hsieh spent an entire year punching a time clock every hour on the hour in his performance One Year Performance( Time Clock Piece). Imagine having to get up every hour and take a photo of yourself for a year. Sounds unbelievable right? After his time was up, he compiled a year’s worth of work into a 6-minute video.

A human punching bag? Anthony Schrag asked random people on the street to take their anger out by hitting him. How he kept his nerves together, the world may never know. The artist offered up his body as a way to talk to the locals about issues they found important in Human Piñata.

6. Sometimes Making Something Leads to Nothing

Is he dragging a block of ice or making a comment on society? That’s up to you to decide, but in 1997 Francis Alÿs pushed ice through the streets of Mexico for 9 hours until it melted, hence the title of the performance, “Sometimes Making Something Leads to Nothing”.

7. Inside The Skin of a Bear

Could you live in a bear carcass for 13 days? We’re guessing probably not. French artist Abraham Poincheval made a home out of a hollowed out bear for his performance, Inside The Skin of a Bear. It must have been un-bearable. Sorry, we had to.

Yoko Ono allowed her audience to cut off her clothes piece by piece and let the world see her, naked and exposed. In her powerful performance, Cut Piece, Ono lets the audience revel at her body and showed no emotion as a way to comment on the status of a woman in a man’s world.

Making another appearance on our list, Marina Abramovic is irresistible in her ability to push any and every limit that you think exists. For 19 minutes Abramovic and then partner, Ulay breath into each other’s mouths in this piece, Breathing In/ Breathing Out,  to speak to the ritual of breathing and the performance ends with the artists on the verge of passing out.