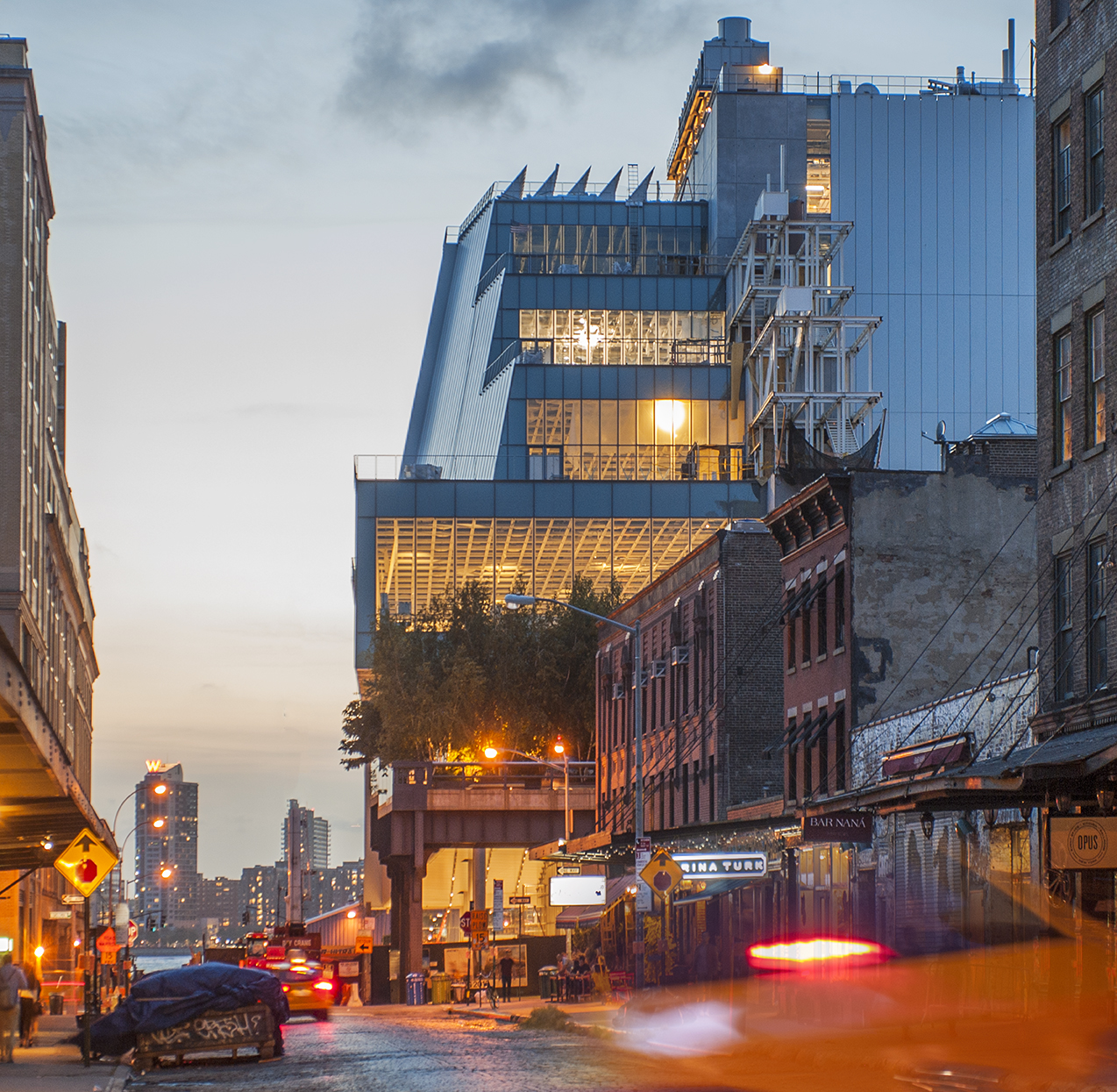 There are tons of reasons to see the Whitney’s bi-annual survey of American art,  which opens to the public on May 17th. Maybe the best one is that, for once, 50% of the work in the show is by women and more than 50% is by people of color. I mean that literally. The Public Library of Science just published a study analyzing US museum collections and found that 85% of the works in their collections are by white artists and 87% are by men.

Diverse makers mean more diverse lenses. I’m all for anything that can help us understand one another better.

A disclaimer before I dive in—this list is purely idiosyncratic. The works here defied the deafening distractions of the jam-packed opening reception to claim my eye. I’ve left out many noteworthy pieces…some just because it was impossible to photograph them in the crush. In particular, Agustina Woodgate’s National Times and Christine Sun Kim’s Degrees of My Deaf Rage series are revelatory. 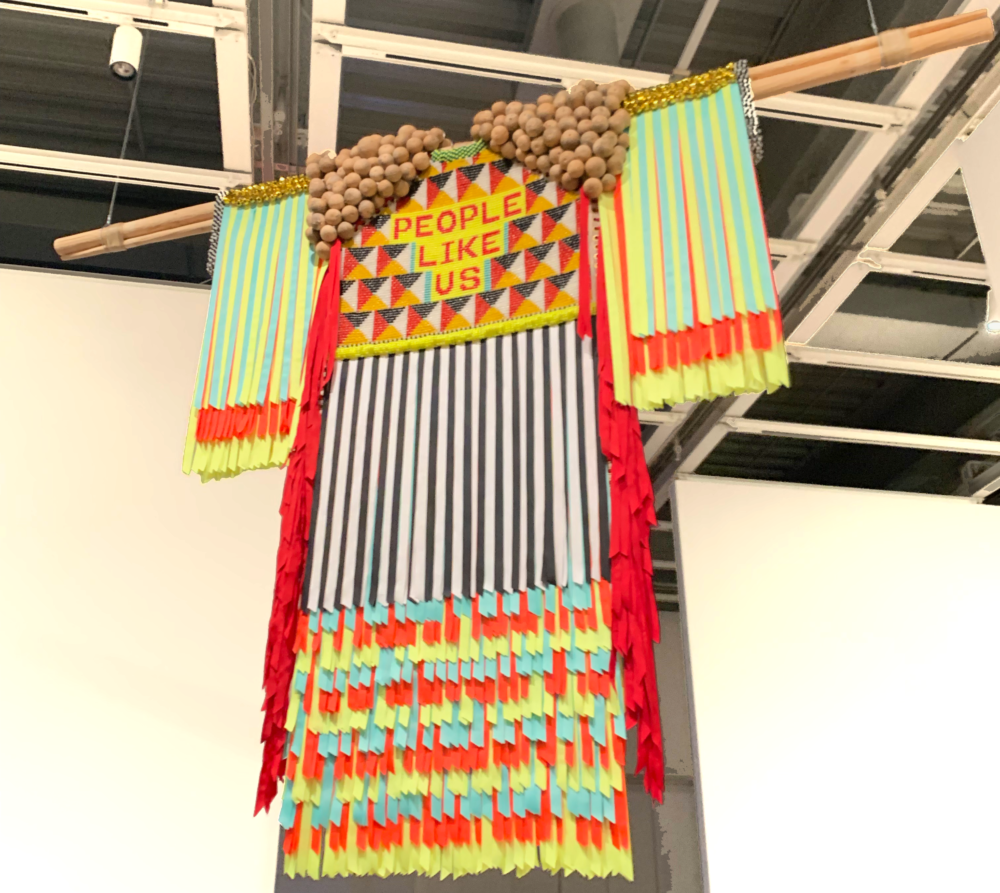 I’ve been watching Gibson’s work since I first saw his beaded punching bags in 2013 on the lower east side. For me, his biennial works are next level. Always colorful, his newest textiles refuse to be easily categorized as simply indigenous, LGBTQ, or anything else. I especially love the ambiguity of the phrase, “people like us” in the work above, both a reclaimed slur and a heady declaration of empowerment. 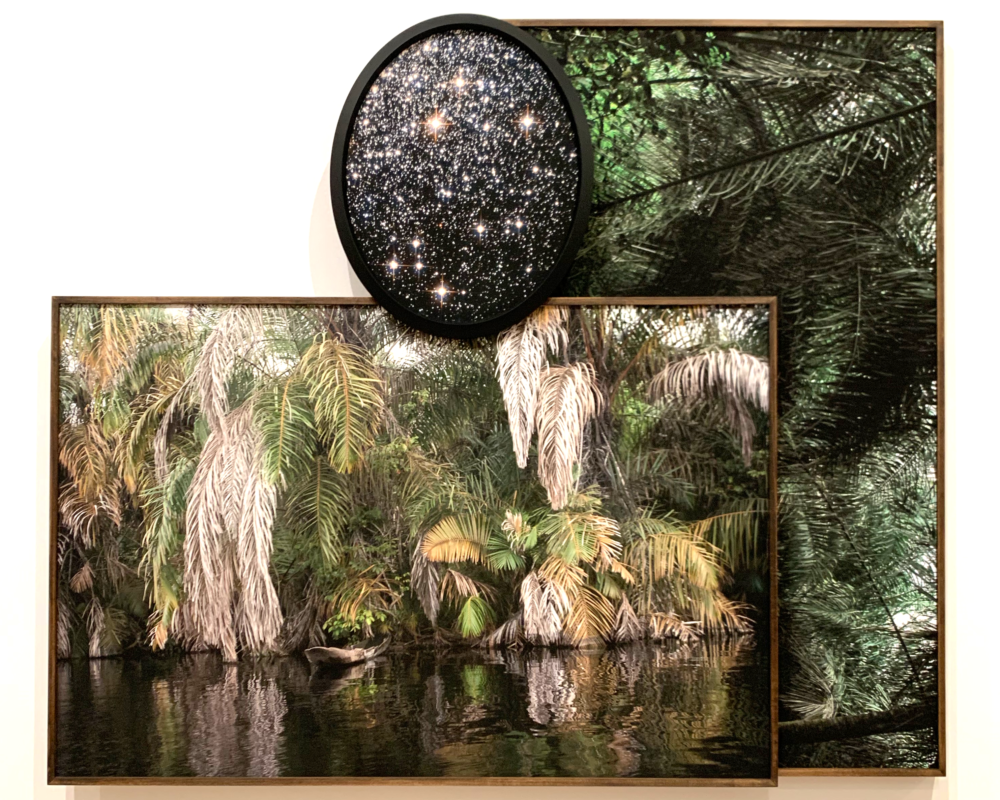 Todd Gray, Slipping into Darkness, All the Honey Gone, 2018

Confession—photography isn’t my thing. What’s seductive about Gray’s pieces is their texture. They’re so densely pigmented that, until I got within alarm-ringing proximity, I thought they might be embroidery. Their depth drew me into the photos so intimately that it completely changed my perception of how the images relate. Experience these as up-close-and-personal as you dare. 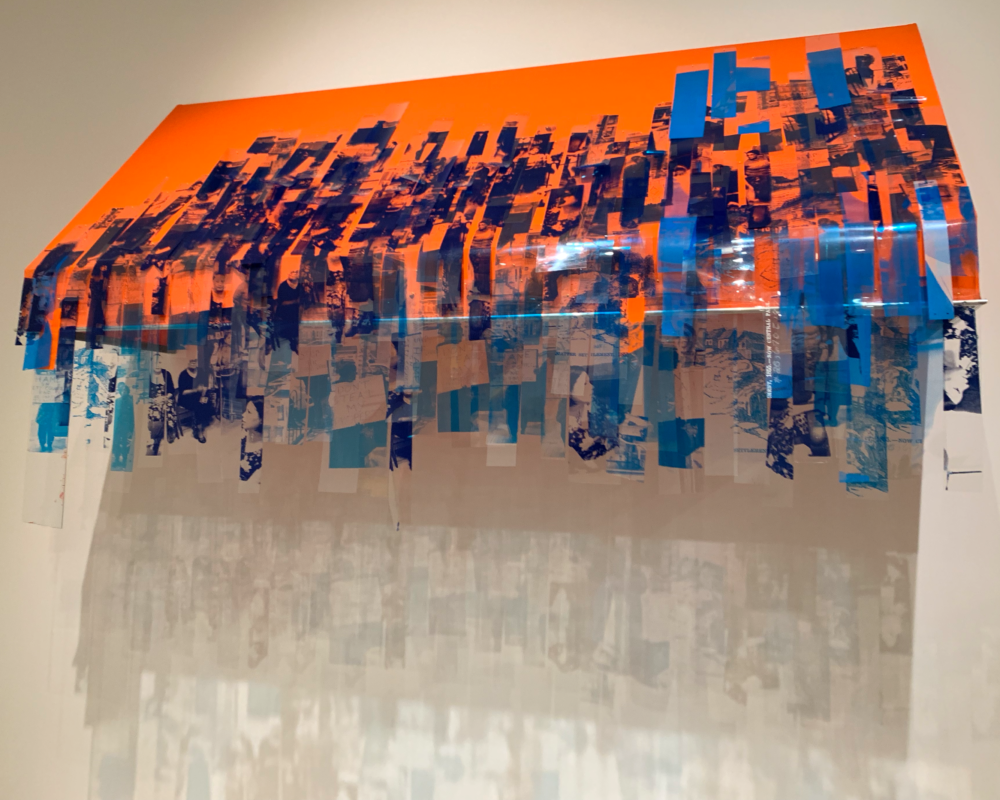 Art is the best way to get bad news. I might forget or miss a headline in the constant downer deluge that’s today’s news cycle. But I can’t unsee Jackson’s vibrant documentary installations. She made me painfully aware of yet another aspect of my beloved city’s institutional displacement of people of color. The work pictured illustrates the razing of a free black settlement to build Central Park; while her other installations unpack current predatory housing practices that perpetuate the problem. 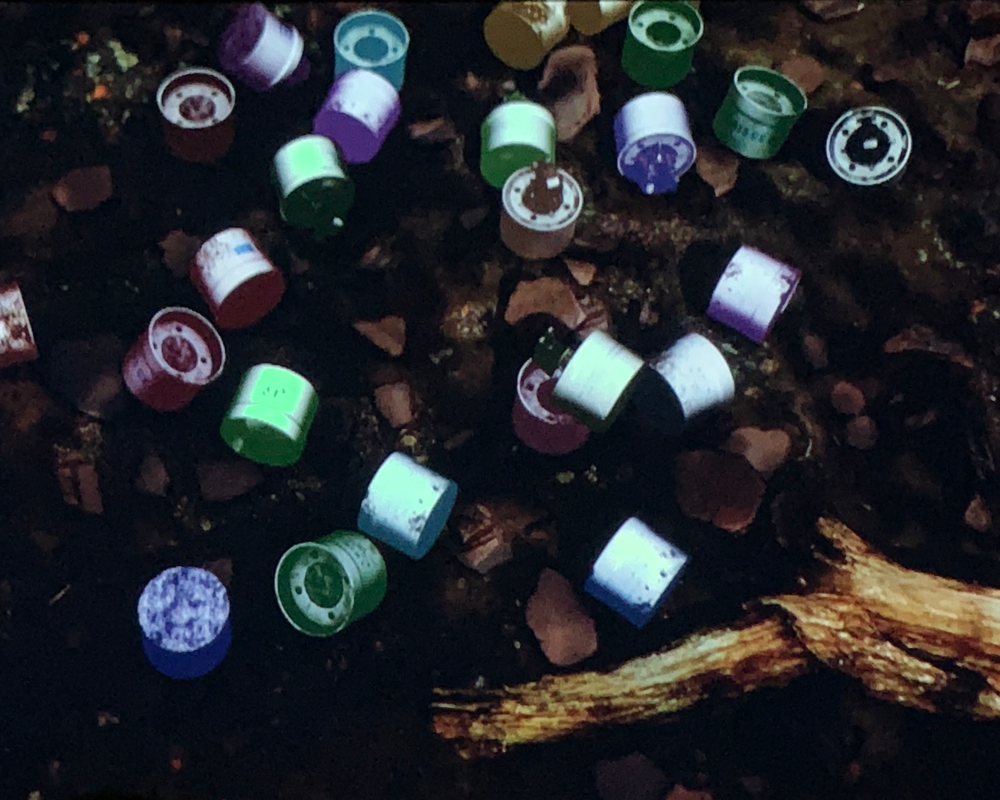 It’s frustratingly fascinating to witness our culture’s incipient struggle with toxic philanthropy. A 15-minute video on the Whitney’s 6th floor painstakingly links two sources of Warren Kanders’ wealth to thousands of brutal attacks on civilians. Meanwhile, he’s still the Vice Chairman of the museum in which it’s being shown. This detail of the video features his company’s Triple-Chaser tear-gas grenade. Outlawed internationally for use against soldiers in war, it’s outrageously still used by governments worldwide against peaceful protestors. 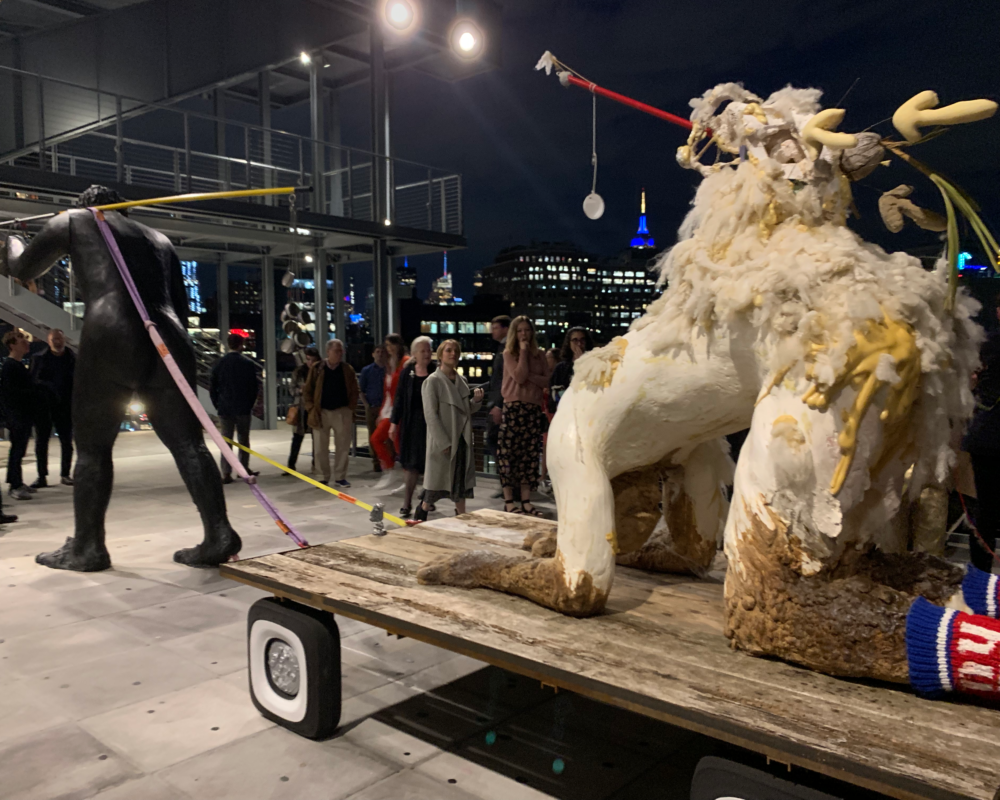 You must know by now that I’m a sculpture whore. So it was a painful thrill to step onto the terrace with Eisenman’s ode to the myriad humiliations of disenfranchisement. The monumental figures embody the new normal of Trumpian vulgarity, complete with one that visually passes gas. (Oy vey.) The massive works are sited, so you can walk among their dwarfing forms—all the better to soak up what must be the mind-numbing despair of a migrant caravan. 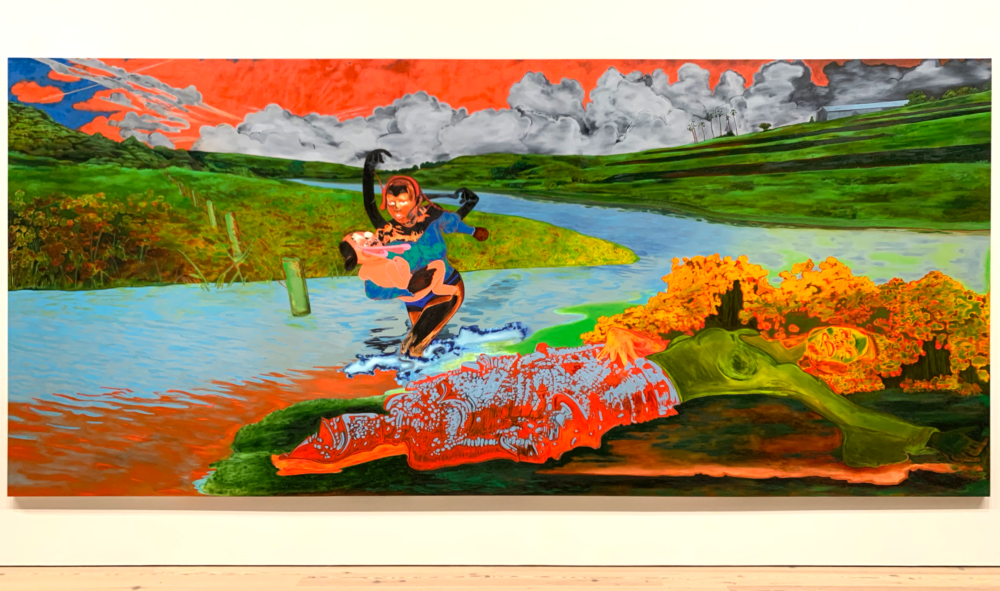 In a show of soul-jangling compositions, Ellis’ vast canvas engulfs you in an oasis of unparalleled beauty. Painted in an aching palette of hot oranges, moody greens, and sickly blues, it’s the highlight of the show for me. I’ve been a huge fan of the artist since one of her works pounced on me at the New Museum’s last triennial, and its appeal hadn’t lessened a jot when I saw it again last December at the Rubell Family Collection in Miami. Ellis’ contribution to the biennial is breathtaking. Visually stunning and layered with meaning (that I’m yet to fully fathom), I could contemplate this painting forever.

What You Missed at the Lincoln Center Young Patrons Annual Gala

Check Out the Newest Artists & Fleas Location in Soho