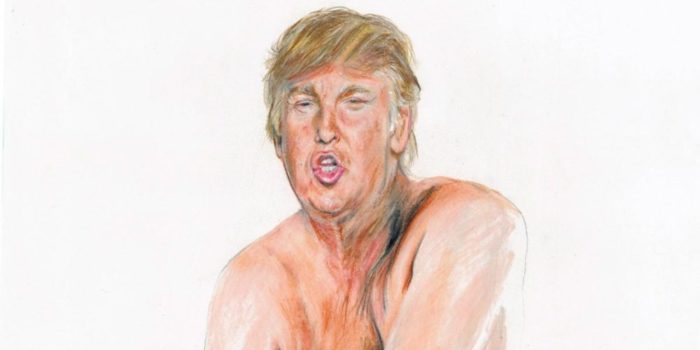 From the simple act of protesting to the creation of powerful anti-Trump works, countless artists are gearing up to take a major stand on or before January 20, AKA Inauguration Day. Here’s how they’re using their talents to fight back:

It all started with a Facebook post by ceramic artist Roxanne Jackson and curator/writer Jessamyn Fiore suggesting a group show in New York City, but because of the massive response, shows are now being held in cities across the country and even across the pond in the U.K. and the Netherlands. A myriad of artists have chosen to participate to demonstrate their solidarity as Nasty Women and defend their rights which they feel are threatened by the looming Trump administration. The New York show, held at the Knockdown Center in Queens, raised over $42,000 and all proceeds went to Planned Parenthood.

Formed by artists Jonathan Horowitz, Alex Da Corte, curator Alison Gingeras, dealer Bill Powers and several others involved in the art world, Halt Action Group held a protest event in New York City on Monday, January 16. Participants were asked to “help the Trumps move” by bringing boxes which many are choosing to inscribe with the rights they fear they will lose come Inauguration Day. Painter Cecily Brown debuted her box on Instagram, which reads “GOODBYE REPRODUCTIVE RIGHTS.”

Thousands of notable artists, art critics and curators, among them Hans Haacke, Richard Serra, Cindy Sherman and Tania Bruguera, have signed on to participate in this act of non-compliance with the Trump administration, choosing to close the doors of their studios, galleries and other cultural institutions on Inauguration Day and hit the streets in protest.

4. Discounted Admission at Museums in NYC and Beyond

5. Poster Designs for the Women’s March on Washington

The Women’s March happening in Washington DC, set to take place on Inauguration Day, put out an open call for poster designs and received more than 5,000 submissions. Eight powerful images were selected, among them works by Jennifer Maravillas, Kate Deciccio, Liza Donovan and Jessica Sabogal. Posters are being printed by female owned and operated printers and a limited number will be available free of charge at the protest, or participants can download 5 of the 8 designs for free and print them themselves.

Perhaps the most extreme measure being taken by an artist to protest Trump’s presidency is a work by L.A.-based Illma Gore. Partnering with Indecline, the activist group responsible for the naked Trump statues placed in 5 different cities last August, she and a group of others have painted a 10-by-15 foot mural using their own blood as well as blood donated by other artists and activists. A public viewing of the work, entitled “Rise Up Thy Young Blood,” was held at Samuel Freeman Gallery in Mid-City Los Angeles on Sunday, January 15.

Opening Night of the InAugural AD Art Show at Sotheby’s

Cally Spooner at New Museum: On False Tears and Outsourcing