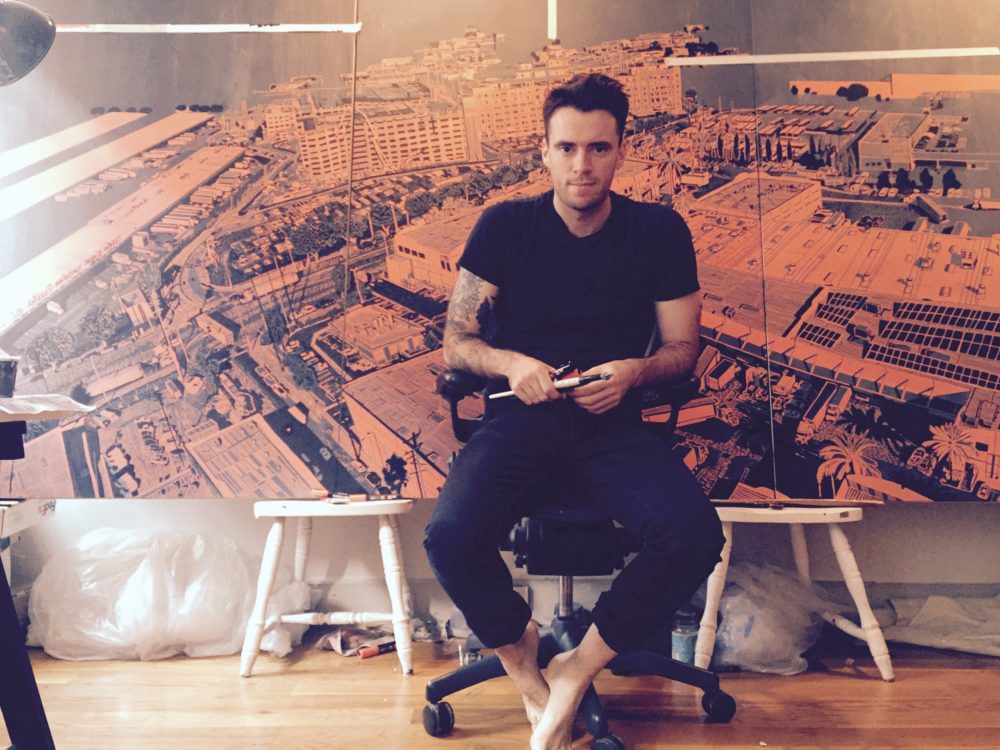 Originally from Bristol, England, artist Patrick Vale recently moved to New York and invited us to check out his studio in DUMBO, Brooklyn. “Is it a painting or a drawing?” Was one of the first things he said before he asked: “What do you think?”

It’s hard to compress his work into one descriptive element because at the same time that it is a drawing; it’s also a painting, a photograph, a feeling, and a point of view. “This is the biggest piece I’ve ever done!” He said as he referenced his new project, Catches Worm. This 12ft long, bright orange cityscape is part of a series of 4 drawings that were commissioned for the new development, ROW DTLA, in downtown Los Angeles complex where beautiful old warehouses are being transformed into creative offices, retail spaces and a center for art and culture.

“I was approached last summer, and I’ve been working with them ever since. So far, I’ve done several line drawings, and I’ll be doing a residency in the complex all through August, with an on-site exhibition at the end.”

Being known for his detailed drawings of landscapes and skylines, Pat has an extensive list of clients such as Apple, BMW, and Pentagram. He owes some of his success to two time-lapse videos that he made of his drawings of New York City. He explained to us how he used sketches that he had made when he was in New York to make these large-scale drawings. “I put it online and long story short, it went viral and a good amount of press and commissions resulted from that. So that was a good calling card for me…”

Empire State of Pen from BigAnimal on Vimeo.

Without the help of grids or stencils, his free hand drawings showcase his raw talent. For about 11 years, Pat has been working predominantly as an illustrator, although he has been drawing his whole life.

“I’d been in London for 15 years, and it’s a fantastic city, but I was ready to move on. I’ve been drawing New York since I was a kid, in fact, I’ve been drawing everything since I was a kid – I used to go around Bristol and draw what I saw there. My dad traveled to the States a lot, and he would come back with these picture-books of the cities he’d just visited – I was fascinated by the architecture, it was unlike anything I’d seen in England at the time. Especially the high-rise – I’d pour all over these books and obsessively draw from them… and that’s been going on ever since.”

Throughout the years, Pat has developed his own technique, eventually even adding color to his skylines. As his newest project reaches its grand finale, he told us a little bit about his process and the time he spent in LA. There’s quite a bit of research that goes into making one of his artworks which includes a lot of on-site sketching and even flying drones around to get a better perspective of the landscape, as he explains, “when I can, I’ll start drawing on site. I take references and I make videos so I can remember what it’s like to be there. I don’t want my drawings to be static, so I use very quick fluid lines to show the dynamic nature of the city and the people in it”.

Specifically for ROW DTLA, Pat filled in two sketchbooks with drawings of what he observed. By getting a sense of what it is like to be in the area and interact with the people in it, he can make a more honest depiction of the cityscape. Even his choice of color tells you a little more of what it was like to be there. The bright orange is a clear reflection of the heat and the light that permeates through the city. Just as much as LA is known for its sunlight and good weather, it is also known for being a car city, and that is exactly what Pat intended to show by not drawing any people in the midst of cars, trucks and buildings.

“What I like about this piece is the fact that I’m predominantly drawing an industrial zone. If you talk about LA you usually think of Beverly Hills or Hollywood or the ocean, and this scene doesn’t really depict that at all. It depicts a real city. I’m drawing trucks that are going places, and I quite like that you can look at it and think ‘where are they going?’. When I’m doing this I feel a bit like a detective. I spend so much time analyzing and looking at old drawings and references, and I start to make stories in my head about what these people are doing or where they are going.”

Pat’s method makes his work even more interesting as he is not making exact replicas of the landscapes, but recreating them based on elements that he took from his references. With a lot of hard, passionate work, he creates big and impactful works that are graphic from a distance, but invite the spectator to get up close and investigate it. His bright orange portrayal of urban, industrial LA will be the focal point of his upcoming exhibition. Pat has expressed the desire to show more of his work to the public and expand his use of media.“That’s my aim for the next 5 to 10 years,” he said, “what a better city to reinvent myself or transition into a different field than New York?”

15 Art Instagrams You Should Be Following This Spring