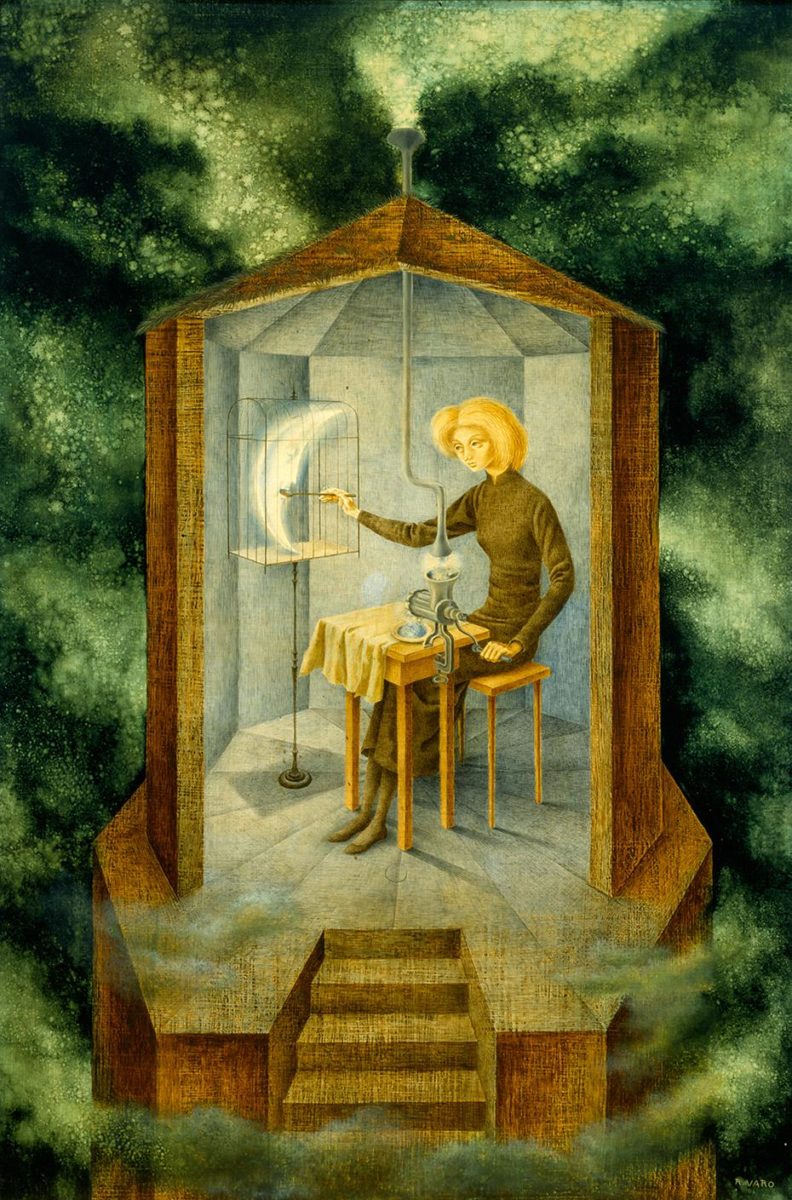 Cristina Farella is an astrologer, poet, and scholar. Her work engages the overlap between the art historical and the esoteric. Her astrological counseling practice, Eighth House Astrology, offers the service of occult insight to those interested in connecting with their own psyche, their strengths, and their shadows. She has been cultivating her astrological practice for 12 years, and is at work on a scholarly research project about planetary influence on blood and emotions in Shakespeare’s Winter’s Tale. Other works by Cristina can be found around the net at Brooklyn Rail, Literary Hub, and Spolia. She is the astrologer for the upcoming Celestial Bodies Oracle. Horoscopes can be found at Serpentfire.ca, and The House of Twigs. Follow her at @eighthouseastro on Instagram for daily planetary updates.

Remedios Varo Uranga was born in Angelès, Spain on December 16th, 1908. A witness to the antics of macho surrealists of the Deux Magots crowd in Paris, and an under-recognized genius of occult feminine imaginary, Varo’s art should be held up with the greatest of her era. She painted lush, mythic dreamscapes which evoke archetypal feelings, uniquely attuned to her own inner universe, one populated by bird-women, troubadours, and portals to the underworld.

Astrology is comprised of twelve principles, each of them with its own archetypal significance. These twelve principles work in accordance with cycles of life, and map out the trajectory of lived experience from birth to “death,” or the ineffable.

Charts of artists carry with them particular patterns, which to this astrologer’s eye are discernible, and important to recognize. We look to the ascendant, the point of initiation in the natal chart, to the midheaven, the angle of legacy, and then move through principles three, five, and twelve, which each speak on these unique topics: intellect and the symbolic order (3), self-expression and the imaginary (5), and divinity, formlessness, and the real (12). Engaging the chart in this way reveals the language, materials, and spiritual themes that are most important to the artist in question. Each chart is undoubtedly unique, and the life of the artist can be traced in this esoteric pathway each time. Let’s take a look at Remedios’s chart.

The first place we look in the natal chart is the ascendant, the angle of the chart that depicts where the eastern sky met the horizon at the time of your birth. It is the angle of initiation, based on the very moment we take our first breath in this lifetime. Varo’s ascendant is located in Virgo at 13°. Virgo is the sign of service, constriction, earth connection, and rituals of the body. Virgo is ruled by Mercury, the planet of communication, language, and intellect. Virgo represents the sixth principle—specifically, the child’s formal introduction into the symbolic order, when the child is forced to become a responsible person. Every poet must use the mastery gained during the Virgoan stage of development to paradoxically return to Edenic childhood and with its principles 3, 5, and 12, a state necessary for the creation of art.

In Roman myth, Mercury was the only god who could travel down to the depths of the underworld unscathed, as he guided the souls of the deceased to the afterlife. That commingling of dayworld and nightworld gives Mercury important access to the recesses of the unconscious, no doubt an important resource for artists of any medium.

In Varo’s chart, we see that chart ruler Mercury is conjunct her Sagittarius Sun in House 4, the house associated with the private self, reflections of the interior mind, as well as ancestry, and one’s roots. This is a deeply sensitive house, even psychic in its connection to memory.

Varo’s Sun opposes Pluto in House 10, the house of public persona and our career path. This opposition in Varo’s chart sets up a binary between home, private, domestic, mother and public reputation, career, and worldly success. There was a tension here that likely pushed her to dig deep into the private realm of the psyche, while also being motivated to share her insight in a public sense throughout her life.

Tugging at the strings of this planetary knot, we see that this Mercury/Sun conjunction is deeply impactful to Varo’s psyche. Mercury, lord of House 1, invites House 1 energy, that is to say, ego-expression, to the 4th House. What’s more, is that the Sun, lord of House 12, activates the Sun in House 4 for anything in relation to the 12th House. This means that Varo’s 4th House contains a blending of the ego identity and the body (House 1), with the spiritual, the ineffable, and the fantastical (House 12). These energies are rooted and manifest in House 4.

Artists with placements like these are often working out of a shared sensibility, one that works with subject matter that is striking and familiar, and rooted in a sensibility akin to the divine feminine, or mothering archetype, as House 4 is traditionally connected to Cancer, the sign of the mother. This blending of private feminine and spiritual, or ineffable qualities surely comes through in Varo’s work, and is one of the features we most immediately recognize while looking at her paintings.

We must also recognize that Varo’s midheaven, the angle of destiny, legacy, and public reputation, is found in Gemini at 10°. Gemini is the third sign symbolized by the twins. This sign talks to us about duality, binary, and tension. Day and night, up and down, life and death, all circulate here.

Mercury is not only the planetary ruler of Virgo, but also rules Gemini, coloring the ascendant and midheaven angles of the chart in Mercurial energy. Mercury in Varo’s 4th House, therefore, is imbued not only with House 1 energy, but House 10 energy, as Mercury is lord of both of those houses. This shows that she is extremely busy in the home in terms of her artistic work. And indeed this is confirmed by her biography, especially her time in Mexico, when she and Leonora Carrington met on a daily basis to paint and write together. In private, engaged in secret conversations only they could fathom, they were manifesting this iteration of House 4’s power.

Varo is a solar Sagittarius, a sign known to be fiery, energetic, expansive, interested in philosophy, spirituality, and higher uses of intellect. Varo’s father was a huge influence on Varo from an early age, giving her books on philosophy, spirituality, and literature as she made her way through a conservative Catholic education. Varo’s biography characterizes her as a deep thinker who spent much time with poets as well as painters (one of her most significant romantic connections being Benjamin Peret, the French Surrealist poet, and her deepest friendship was of course with Carrington, another genius of her time).

Varo’s work regularly draws on mythic figures and makes references to the divine feminine and witchcraft. This is undoubtedly the influence not only of her Sagittarius Sun which attunes her ego to such matter, but of the fact that the Sun is lord of her 12th House, which is house of the unknowable contents of the soul. With Sun in Sagittarius, the expression of her ego sense is in service of the 12th principle, the principle of collective esotericism, healing, madness, and the divine.

Varo’s Sun acts on behalf of the 12th House, meaning that her ego sense is both Sagittarian and Neptunian. Here the occult and the intellectual blend together, spilling over like ephemeral dream-water onto her natal Mercury, the planet of linguistic and intellectual expression. All in all, this is a potent and mystical orientation for an artist. Her Sun and chart ruler are awash in rich psychic and philosophical material.

Varo’s 3rd House is ruled by Scorpio, sign of chthonic depth. To get more information on how the 3rd House expresses itself, we can look to see that Pluto, Scorpio’s ruler and the lord of her 3rd House is sitting in her house of career. Pluto makes critical angles to Mercury and Sun in House 4, connecting us back to that initial locus of artistic power.

As Pluto is the lord of the 3rd House, Varo’s Pluto carries with it House 3 weight. Pluto is the planet of revolution, obsession, and underworld energy. In Varo’s chart, that all gets filtered through the 3rd principle—the intellect. Her Pluto is highly artistic, intellectual, and critical. This is another indicator of her ability to combine the realm of dream/nightmare (Pluto) with the innocent symbolic order, curious for curiosity’s sake (House 3). Another characterizing feature of Varo’s work is that she depicts the systems, machinery, pulleys situated in seeming dream landscapes. This is all stuff of House 3, which combines logic with movement, systems with magic.

Varo’s natal Venus is found in Scorpio, a placement that is known for its tenacity in love, as well as deep psychological intensity. Venus in Scorpio brings on a Romeo-and-Juliet type passion, and natives of this placement are intuitive and obsessive, often merging with romantic partners and friends, alike. Venus in Scorpio is an artistic placement, and Venus is the ruler of Varo’s 9th House, the house of philosophical and spiritual matters, travel, and higher learning. This brings a richly expansive and spiritual focus to Varo’s artistic and material sensibilities, as Venus is the planet of art, amongst other things. House 3 is also home to Varo’s Part of Fortune, indicating that great gifts emanate from this region of the chart, and the psyche therefore.

Sitting in Varo’s 3rd House, we also see Mars, planet of war and conquest, sitting trine Neptune, planet of oceanic intuition and fantasy. This gives power (Mars) for making intuitive connections that go beyond the realm of reason (Neptune). Mars is also conjunct Venus, the planet of aesthetic values, passion, and intimacy.

Venus is the goddess of surfaces. Varo’s Mars conjunct Venus and trine Neptune to me leaps out as an indicator of Varo’s style of painting, which is luminous and meticulously detailed as a Renaissance painting, but is also unique in terms of its approach to the actual surface of the canvas.

Varo invented a method of spreading paint on her canvas whereby she would thin her pigments to a liquid state, gently drip them on the canvas, then blow them across the surface. This created that ephemeral and cloud-like irregularity that characterizes much of her work. With Mars conjunct Venus, she had the conviction to pioneer an innovative style of painting. With Venus and Mars trine Neptune, this new approach was one that lent itself to a dreamy haze, making the work of this Sagittarian painter strikingly Neptunian.

There is more to say about Varo’s chart, but we will stop here for now. From witchcraft to dreamscapes, from night gardens to castles in the sky, Varo’s paintings are truly her own, and emanate brilliantly from her unique astrological makeup, which blends the symbolic with the mystical, painting the chthonic depths of femininity that is at once future and past. At once delicate and powerful, historical and fantastical, Varo’s work demands our attention over and over again. Look deeply, and try to fall into one of her echoing chambers, constellated with magic only she could produce.

Sneak Peek: Artwork at the Affordable Art Fair NYC for Under $1,000