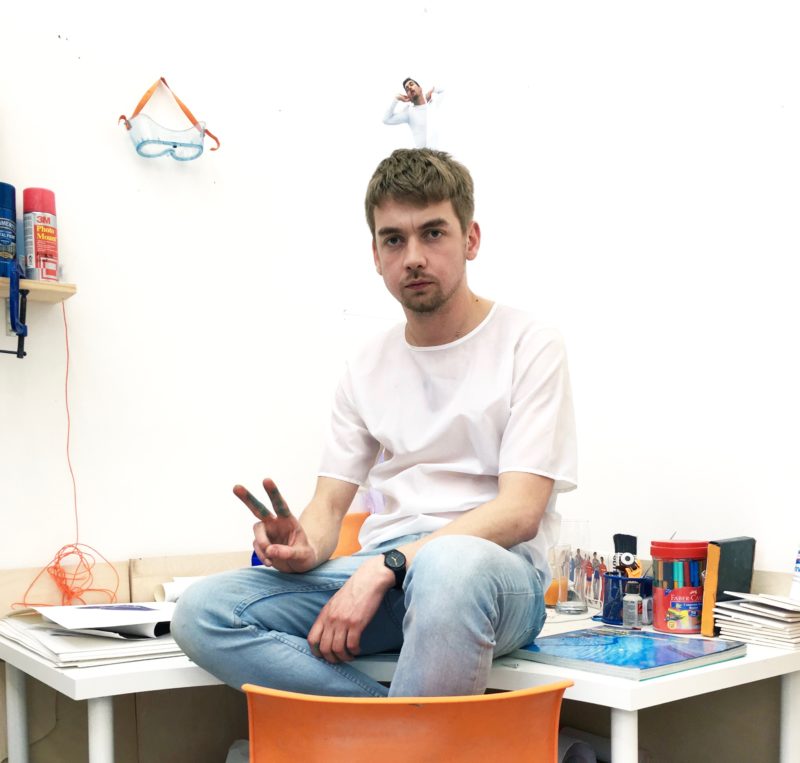 Alexander Glass in his studio in London

Alexander Glass is a British sculptor and installation artist based in London – and our new heartthrob. His subtle and gorgeous installations pack a powerful punch which leaves a delicately crafted aftermath in the mind of the beholder. Creating scenes which at first appear beautiful and seductive, Glass reveals the implied horrific potential with traces of violence and catastrophe in a fantastically cinematic style. Be sure to check out his exquisitely curated instagram feed to reevaluate what your #artgoals are.

Currently studying an MA in Sculpture at the Royal College of Art (RCA), London, Art Zealous caught up with Glass and talked objectification and sexuality, locker room horror and the combination of all three, Donald Trump.

AG: I think one of the major concerns in both my material and visual research is the slippage between these two concepts. I wrote my thesis on ‘Homo-erotica & Horror: thematic potentials of sports spaces’ which discussed the representation of the male figure through cinema, advertising and pornography within swimming pools, gyms, locker rooms and communal showers and discussed the reasons of why these spaces are so often used as legitimizing scenarios of both male objectification and violence.

AZ: How does your work respond to the current political climate, particularly involving Trump and the potential concerns over the liberty we currently enjoy in expressing our sexuality?

AG: I think the Trump thing and frankly so much of current politics, which has become so divisive is such a big concern for the communities that I consider myself a part of and that it is a really difficult thing to deal with right now, especially as to me there seems to be an overall atmosphere of continuing disbelief. I’ve undulated between anger and apathy, but I think the only way I can deal with this through my practice is to engage further with the personal political messages of my work.

As a sort of approach to this, I have been trying to reassess positions I have been when I was growing up that have made me feel weak and powerless, and am attempting to re-write myself within those situations as the aggressor or the monster to retroactively become something that someone should fear or something that I might be made out to be anyway. I’m not sure how this fits into a political strategy, but I think the interpretation of the monstrous seems very important right now.

AZ: Do you consider there to be a feminist side to your work? Considering it is mainly male-focused?

The ‘gaze’ in my research, and that is suggested in my installations, is always a sexual male gaze on arenas of the masculine. I think through this I give myself a power within my art to sexualize the heterosexual male body in a way that is much harder to do within everyday life. There’s a subversion of traditional heteropatriarchal structures in this, but I don’t think I could say that my work expresses a feminist agenda, despite my own position.

Rather than being feminist, I think the work is sympathetic to a more expansive idea of progression, I have become much more comfortable with it having a queer agenda, and I believe those two agendas strive to be intertwined.

AZ: How conscious are you of the beauty of the objects and the scenarios you produce? They almost encompass the luxury of a Wes Anderson film.

AG: Aesthetics are the fundamental building block of my work, and I develop all my installations with a conscious understanding of how each object speaks to each other through color, form and narrative. I really like the idea that my installations may have a Anderson-esque quality, I think there is always an element of the luxury or aspirational in how and what the work presents. Though of course, I love beautiful things, I try and understand them as just symbols and objects that together build an image that disguises a reality. That separation of the sculptural installation as a 3-D image that represents a type of space is really important and has a relationship with advertising. Again that idea of seduction disguising the reality of something’s more horrific qualities.

AZ: How far is the ‘self’ a reference in your work? Do you play with your experiences or take from others? If it is your own experience do you consider it as if you were in a play?

AG: The images and scenes I recreate come from a pool of visual clichés and tropes of narrative cinematic scenes. These come in the form of replica or insinuated fake copies of theses scenes: I place myself within in them as much as I have an understanding of these spaces myself. Locker rooms and swimming pools, and the reality of awkwardness that frequently comes in those spaces as contrasted to the gloss cinematic representation of them. I want the work to show that these spaces are falsities, while hoping to show a material awkwardness.

As I mentioned before, I’m attempting to write myself into past experiences. There has never really been performative bodies in my work though the spaces are really suggestive of performativity, I think in my last few months of the RCA, I wanna test that barrier and do things I’m not necessarily comfortable with. I think that means putting a larger part of my experience very openly within the work and taking on the challenge of directing it.

AZ: Has the Royal College of Art played a role in changing the way your work has progressed in terms of style, medium or production?

AG: When I arrived at the RCA I think I was already very in-tune with how I wanted my work to look and feel, but I think I have pushed myself into a much more honest and conceptual place as the past year and a half has progressed. There is also a pretty great access across the university despite the significant increase of students. I’ve been pushing myself to try out as many different technical departments as I can, I’ve been trying out casting, in resin plaster silicon and bronze now, tried my hand at metalwork and the screen printing.

Using screen prints as an addition to my work has been a great way of simplifying some of the important imagery of my work and whereas sculpture can be a hard thing to buy the prints are way of making my work sellable while still being very much still representative of my practice.

Though I think the main influence of being at the RCA is the other students there are fantastic network of people throughout the University. There are a lot of challenging conversations and (mostly) friendly competitiveness over work which I think results in a good working atmosphere. I sound like a flyer, but it really isn’t what I’d expected it to be. I’m so happy with where I am with my work right now even though these things come in waves for me.

Alexander Glass (b. 1991, London, UK) is a London-based multidisciplinary artist whose work incorporates sculpture, video, installation, and printing. He received his Foundation from Central St Martins (2011), and BA (Hons) in Fine Art Sculpture from the University of Brighton (2007). He is currently studying for his MA in Fine Art Sculpture at the Royal College of Art, London.

all images // courtesy of artist

Empowering Women in Contemporary Society via Allegory, Myth, and Hope