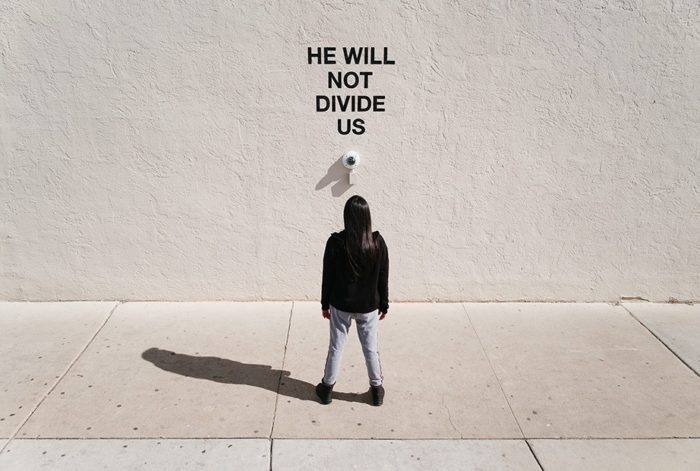 Shia LaBeouf’s He Will Not Divide Us art installation has officially been shut down. Controversy seems to follow LaBeouf and his artistic pursuits: from being accused of plagiarism and more plagiarism to being called ridiculous and a narcissist. We’ve been trying to keep up with the craziness surrounding his He Will Not Divide Us project, and it seems that there is now a final chapter to report.

The project, created by LaBeouf’s art collective LaBeouf, Rönkkö and Turner, launched on the day of the presidential inauguration. The installation, intended as a show of resistance against the current administration, was mounted on the side of Museum of the Moving Image in Astoria, NY. The public was invited to say the phrase “he will not divide us” into the camera’s lens as many times as they wanted. These declarations were live-streamed for 24 hours a day, 7 days a week for what was supposed to be the full presidential period.

The artists, LaBeouf, Nastja Säde Rönkkö and Luke Turner, were joining the crowds of people who wanted to make their statement to the world, including actor Jaden Smith, who repeated the phrase for two hours straight. But, the trolls and hecklers and, yes, white supremacists, quickly showed up and LaBeouf was arrested for an altercation with someone who was speaking white supremacist phrases into the camera. The installation continued for nearly a month before the Museum decided to cut ties with the project on February 10, claiming that “the installation resulted in an unexpectedly volatile situation and serious public safety hazards.” The LaBeouf, Rönkkö and Turner website called it abandonment.

About a week later, on February 18, He Will Not Divide Us found a new home. It resurfaced in New Mexico, at the El Rey Theater in Albuquerque. Lo and behold, it took less than a week for the installation to be shut down in the new location. This time, it was at the hands of LaBeouf himself. In a tweet, he explained: “We have taken the stream down after shots were reported in the area. The safety of everybody participating in our project is paramount.”

So long, He Will Not Divide Us. We always appreciate participatory art, as it gives the community a more active voice in the artistic process … even if it did shut down three years and eleven months early.