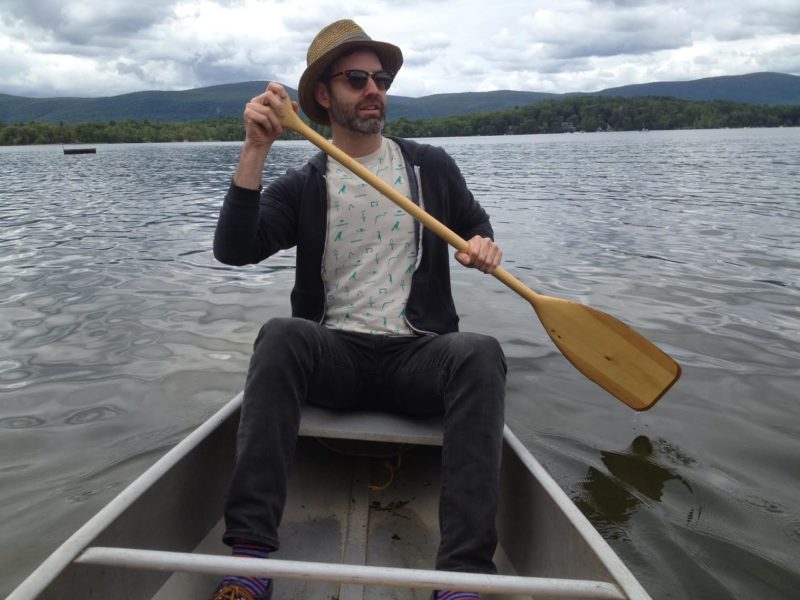 If you attended or read about the 2016 Outsider Art Fair, you probably read about Scott Ogden and his new gallery Shrine. The much talked about booth was one of the highlights and crowd favorites at the fair. We recently caught up with Scott to chat about how he came to open Shrine and discuss his newest show, Alessandra Michelangelo (1961-2009).

Scott Ogden: Strangely enough, I love making bone broth to sip. It’s just about as nerdy as it gets, but it makes me happy. For “drink” drinks, a nice glass of red wine has been hitting the mark for me lately.

AZ: How did you come to open Shrine?

SO: It was all a bit fortuitous and unexpected opening the gallery- I didn’t have any plans to open a space, but early last fall I was browsing the Listing Project for a new studio and came across the listing for this space. It was somehow within my very small budget, but I sat on it as the thought of starting a gallery still wasn’t in my head. However, this feeling of having missed out on something really special nagged me for months. Randomly, I came across the listing again on my phone’s web browser, and it was still available as the initial ad had immediately been taken off of the List for some reason. I finally saw the space in person, fell in love with it and after a month of DIY renovations with a friend, I opened Shrine.

AZ: Why the Lower Eastside?

SO: This stretch of the LES/Chinatown, which I recently learned is called Two Bridges, was completely new to me. It’s a bit cliche to long for “old New York”, but this neighborhood resonates to me as being from a slightly different era. People who grew up here still live here, there’s a lot of sky with no huge buildings around and there’s a certain abstract charm to it all.

AZ: What are some artists you collect yourself?

SO: I have had a bit of a collecting problem since early college-life. Ebay used to be a habit as well as some of the lesser known folk art auctions. I also trade with friends and have traded my time as an art handler in exchange for art. Some of my favorite artists that hang at home are Prophet Royal Robertson, Hawkins Bolden, Erik Parker, Rev. George Kornegay and Karl Wirsum.

AZ: Do you only show Outsider or self-taught artists?

SO: I show both contemporary and self-taught artists’ work. Anything that strikes me as unique and heartfelt is fair game for Shrine. There are so many labels surrounding outsider and self-taught art, and none of them really benefit the field or the work. So I try to avoid them and simply show work that moves me on some level.

AZ: Why is self-taught art important to you and the gallery?

SO: In art school, coming across the world of self-taught art completely opened up the way I think about what it means to be an artist. There is such a purity of intent with this kind of work, and most of the time it has been made for no other reason than someone felt compelled to create. Audience and having a “show” are not considerations… It’s more about needing to get something out into the universe. It’s powerful work, and I love being able to exhibit these artists alongside emerging contemporary artists who also inspire me.

AZ: Tell us about your new show with the works of Alessandra Michaelangelo?

SO: Alessandra Michelangelo (1961-2009) is an exhibition of pastel and colored pencil drawings by the late Italian self-taught artist, Alessandra Michelangelo, who lived and worked in Livorno, Italy. Alessandra began to exhibit signs of schizophrenia at the age of 20 following the death of an older sister, and she was placed into a series of psychiatric facilities and residential mental health centers, where she would spend the bulk of her adult life. Despite being described as extremely remote and disturbed by doctors, Michelangelo began to obsessively create, often drawing with both hands simultaneously to complete her work. Her work has an uninhibited and intuitive confidence, but is at the same time quite subtle and quiet. During the last ten to fifteen years of her life, she produced a very unique and cohesive body of work that offers us a veiled glimpse into her private world.

AZ: Why did you decide to show Alessandra’s work?

SO: I first saw Alessandra Michelangelo’s drawings at last year’s Outsider Art Fair and was instantly struck by their strength and soft beauty. They’re very sophisticated drawings and possess a muted strangeness that, to me at least, unfolds the more I spend time with them. I’m so excited to open the fall season with her work.

SO: Selling a young college student his first piece of art during my last show. It was a small moment, but his excitement towards the space and the art was contagious. It took me right back to the first time I decided to go broke for a month so I could buy a piece of art to live with. I still have that first Royal Robertson drawing and will hold onto it forever, I imagine.

AZ: What’s next after Alessandra’s show?

SO: Fall will be fun here at Shrine. In October, I have a solo show of new works by a young artist named Kyle Breitenbach. Kyle works primarily in pastels and oil paint on both paper and linen, and he just has that touch that’s impossible to fake, if that makes any sense. I was blown away by his drawings the first time I saw them and the work just keeps getting better. In November, I have a lot of short-run programming happening: a one-night-only show by Andrew Ondrejcak called Free, where we will give out free drawings, and I am hosting a performance art party called dialperformanceart.net that came to life for the first time at the end of a fairly debaucherous meal with friends. Homemade games are the best.

Board Games and Excessiveness With Artist Kristin Simmons

This Week in the Art World: April 3rd – April 9th