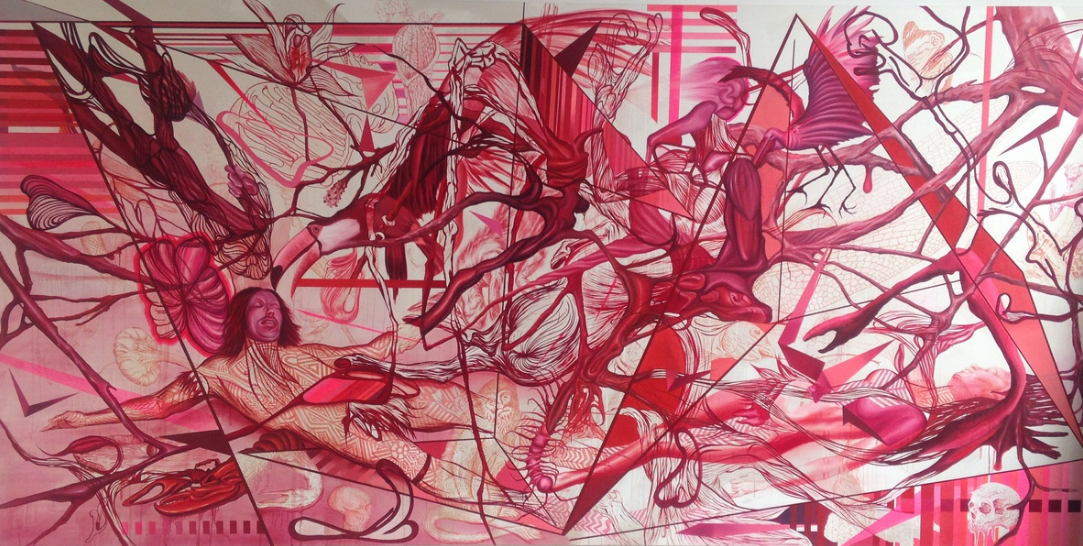 We were instantly captivated by Rodolpho Parigi’s magenta paintings, as magenta is Art Zealous’ trademark color, but we became even more excited when we discovered that he is actually two artists in one! Born in São Paulo, Brazil, this handsome young artist is known for his large-scale paintings of nerve looking lines and explosive representations of fused bodies.

Thinking about queer identity and transformation, Rodolpho becomes the stunningly gothic Fancy Violence. Through performance and painting, Fancy and Rodolpho explore the pornographic imagery that permeates the collective unconscious, creating art that is shockingly beautiful and profoundly introspective.

More than just talented, Rodolpho is passionate and extremely kind. Luckily for us, he was able to find some time to chat about his creative process and his sexy tableau-vivant.

Art Zealous: When you decided to become an artist, how did you start making your work?

RP: In reality, when I decided to become an artist it was a moment where I started to understand that I was a person who wanted to spend hours and hours of the day by myself, working alone and creating something with my hands. That was basically it.

I mixed many elements like lust, desire, research, as well as hours and hours of work. What I usually say to young artists is that the life and work of a visual artist, a drawer, a painter or a sculptor is, firstly, a very lonely one, and secondly, one that must be done with pleasure. Finally, you must be persistent. Persistence is perhaps the determining factor of the whole process because there will be difficulties and there will be people who don’t like your work, and there will be times where you might not be able to make money. If you’re not persistent, you’ll probably end up abandoning the profession. The work has to give you visual and emotional pleasure. For me personally, I like getting involved in a sort of personal narrative, and I have a lot of ideas. If I weren’t an artist, I’d be crazy; I’d have to see a psychiatrist five times a week (and I only see him once, which is good).

Art Zealous: Where does your inspiration come from?

RP: I think that my work comes from an internal desire that moves me. From that point on, my work is created from a mixture of mental pictures and images seen in fashion magazines, or on National Geographic, and everything else that I like, and from that I create the bodies, the physiology, the skeleton, the skin, the nose, the eyebrows, the hair… it all becomes a backdrop for something that is eventually molded into shape.

There’s never one specific idea that I commit to, but I do have many recurring themes like the human body, botany, sexuality, fashion… All of these things fuel me.

I’m always connected to a multitude of things, and eventually I am surprised by something that makes me want to go back to work. Sometimes I spend one or two months without doing anything, but thinking a lot… And then when I come to the studio, I have images in my head that speak to me and collaborate with me as I compose something new.

Art Zealous: Do you think your work/style has changed throughout your career?

RP: It’s funny that you ask that! I think I’ve actually gone back to doing what I did at the beginning of my career. After about nine years of living as an artist, I’ve realized that the subject is still the same. What changes is the way it’s made and the new form that it takes.

I’ve just started to use watercolor, but I still have that same line that resembles a hair, a nerve, something that is being stretched or even an orifice.

That’s basically it. We end up doing the same thing our whole life. The visual components of my work have changed a little, but the aspect of femininity mixed with botany and the image of muscles, fibers, and the man-made environment, still interest me. For me, art is cyclical, not a straight line. You can’t just neglect the past and look solely to the future.

Art Zealous: How about your alter-ego? Has Fancy Violence always been a part of you?

RP: I think that Fancy is a pulse that makes up my existence and in reality, I’ve always wanted to represent a certain kind of mutation in my drawings; a kind of gender mutation. I’ve been inspired by people like Ney Matogrosso and things that are in between male and female; beasts and animals. I’ve felt that ever since I was I child. Logically, these mental fusions were expressed through drawing, so I would present and represent figures that had the element of trans (not just transgender, but also an element of science-fiction in which things are mutated and transformed).

Fancy was born from a painting. She’s a tableau-vivant: an expression that we use for shows or performances that have aspects of painting and drawing. Ultimately, Fancy is a sculpture that moves, and she is born from that ideal as if she were stepping out of one of my paintings. I created her from my body, which is the base of this sculpture.

Fancy has a psychological appeal because she is within me. This alter-ego is a part of the art that I make because she is not a Drag Queen in the literal sense of the word, but she is actually a character; a unique character that cannot mutate anymore because she has already been constructed. She is gothic, very tall, almost like an X-Men character, with a sci-fi look. Identity and sexuality are not a concern for her. Fancy is a piece of artistic experimentation which blurs my social persona. She has her own personality, her own clothes, and it’s almost hypnotic; no one really knows what’s going on.

Art Zealous: What element is more important to you, reality or fiction?

RP: I believe that I’m in between these two elements. Maybe that’s it because neither reality nor fiction alone is enough. I come and go between these two things, and that is why I don’t label myself as a surrealist or even a realist. I like the middle ground, which can be a bit confusing and a bit raw, but it is magical.

Art Zealous: Would you say your work is political in any way?

RP: People are always asking that question but honestly I find it a bit boring. My work doesn’t need to be a banner for a political statement because the images I create are already talking about something much bigger than that, which is existence. I’m dealing with deeply psychological subjects that sometimes suffer a lot of prejudice in society. By doing that, the art is automatically political because I am bringing attention to what I believe in, even though it might not be supported by everyone. I believe in my work, and I believe in my ideas, which is already political in a way because I am taking a stand, having an opinion about the world.

Fancy is ultimately a political work. Being a man that shows up dressed like a woman performing throughout the city, especially with all that has been going on lately, I am exposing myself. There’s an element of courage as I’m subject to judgment, and that ends up being a political statement. Since it is all very natural to me, though, I don’t think it’s something that I need to be announcing, because it is already being said in art-lingo.

Art Zealous: What is your favorite color?

RP: I can’t lie, when I’m creating my works, I like using magenta. I call it magenta and not pink because magenta is technically a center that generates many other colors: reds, pinks, purples etc. Some people love it, and some people hate it or criticize it. I’ve used many other colors, but I think that magenta speaks about life and death, pleasure and desire. It has an intense vibration, and it can even bother or perplex, which is a statement about how I feel today. This world isn’t very easy to live in, and we have to deal with prejudice, death, capitalism. There’s so much at stake.

This color won’t go unnoticed. I don’t think my art would be as good with other colors. I’ve done drawings in black and they were great, but when I use magenta it is just better. Maybe I’m obsessed, but I do love it.

Art Zealous: How do these images come to you?

RP: I’m an insomniac, so I research a lot. I spend my whole life researching things. I look at a lot of fashion magazines, art websites, images of nature, and I watch a lot of movies and learn about biology and anatomy. Sometimes I’m watching a movie, and I have to pause it more than 40 times to take pictures of the screen. All the things that I research and look at become a part of a lucid dream, and then I panic and have to run to the studio to start working that same day.

Art Zealous: Is there one emotion, feeling or message that you want to pass through your art?

RP: I don’t think I need to please my audience, but I can’t say that I only make art for myself or that I don’t care what anyone else thinks, that would be a lie. I don’t live on Mars; I’m human and I am connected to many things so obviously I’m concerned with what others think. I like to know if my work has an impact on people, if it changes their lives or the way they think. I like to put out images that excite people and that remind them of sexual desire. My work is about life, not about death, but it also talks about death because there isn’t one without the other, like yin and yang.

Art Zealous: What’s next for you?

RP: I’ve stopped performing as Fancy Violence for the meanwhile. I had previously spent two years working with her, and I did several performances. It was incredible! Now I’m back to working with drawings, and I’ve been doing some watercolor paintings that I will be exhibiting in New York soon at the Nara Roesler Gallery.

Kim Truong on Ceramics and “Implicitness” in Art