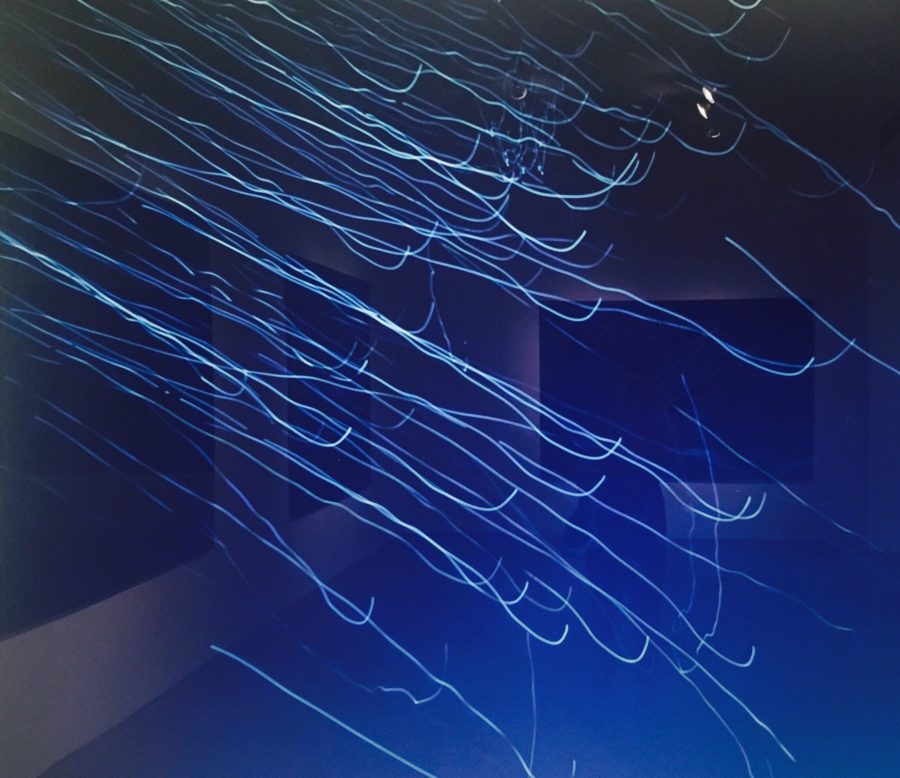 On Tuesday, September 26 Magnan Metz hosted the opening reception of Duke Riley: Now Those Days Are Gone, a celebration and extension of Riley’s public art piece Fly by Night (2016). Including elements from Fly by Night along with new works inspired by it, the show presents a political reimagining of the New York City pigeon culture of days past and features works from the past ten years of Riley’s career.

Taking up an entire room in the gallery space are large-scale, long exposure photographs of the LED patterns created by the thousands of pigeons in Fly By Night. The photos capture the abstract pattern that, while serene and contemplative in its dusky cobalt, traces the erratic choreography of the carrier pigeons. Originally commissioned by Creative Time and the Brooklyn Navy Yard (which was once home to the country’s largest naval fleet of pigeon carriers), the temporal wonder of the original Fly By Night project leaves a tangible trace in these photographs.

While the photographs of Riley’s work present a stoic, macro, and quietly nostalgic perspective into Fly by Night, his installation The Armies of the Night provides a microscope view of the flock he employed as tiny drones with LED beacons. The Armies of the Night presents a partial view of a whole 1,000 painted and embroidered panels, each depicting an individual carrier pigeon and identifying it by moniker, loft, and crew. Aside from some of Riley’s more political installations in the show (Death from Above, mosaics of hawks menacingly swooping down to snatch their prey – in this show’s lexicon, pigeons), The Armies of the Night is a fun one to look at with a friend after happy hour – personal favorites include a cheerful-looking Russian Damascene Mix by the name of “Bad Ass Mother Fucker” and a particularly plump Black Danish Tippler with a far-off look in its eye called “Cheese Danish.”

Other highlights of Duke Riley: Now Those Days Are Gone include an impressive 3.5 x 14 foot seashell mosaic bearing the title of the show that gives off an “Ancient Roman tile mosaic meets Cape Cod” vibe, and “It’s coming through a hole in the air,” a massive Egyptian-style work on paper depicting everything from hermaphroditic mermaids to MC Hammer (as a hammerhead shark).

Duke Riley: Now Those Days Are Gone is on view through October 21st at Magnan Metz Gallery, 521 – 524 West 26th Street in Chelsea.