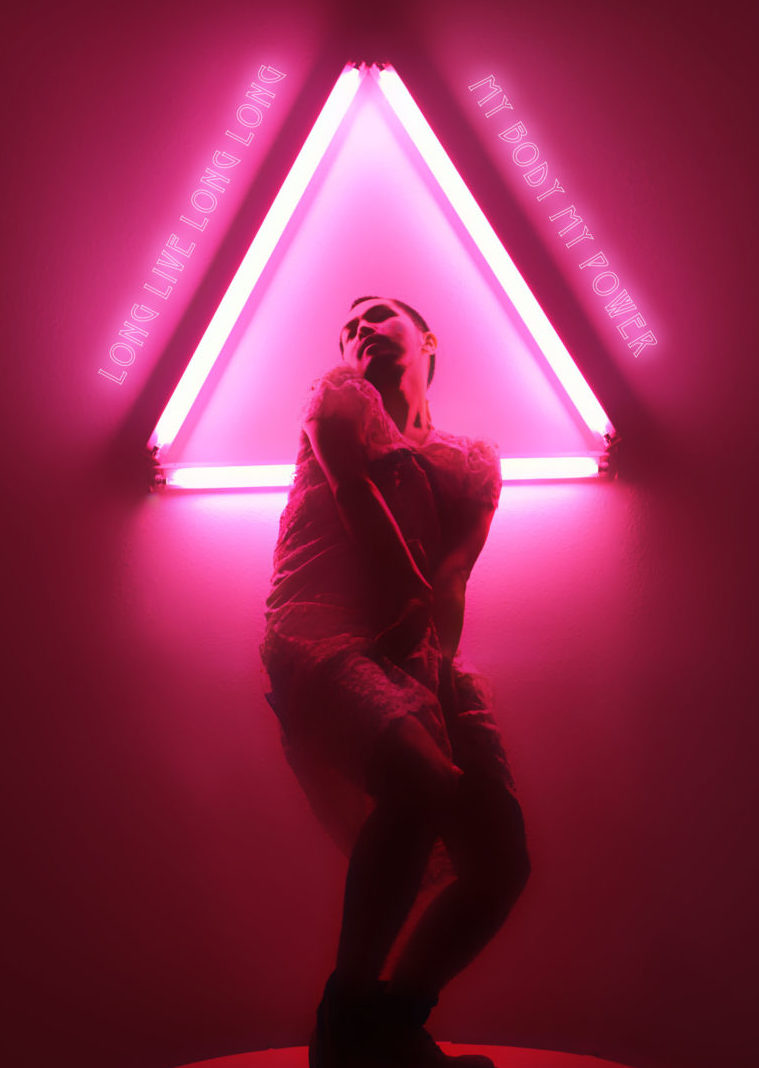 Art Zealous ran into Long Long at an opening, where they had just come from a performance with the artist Kim Ye. They told us we needed “to be cured,” and proceeded to squirt two syringes of two mysterious fluids at us, one of which tasted suspiciously like pickle juice. Throughout the night, Long Long continued to “cure” the attendees of the opening. This past weekend, Long Long performed at the Hammer Museum of UCLA and has another performance coming up at Redcat. To get the inside scoop on this mysterious and glamorous personality, we talk to their (alter-ego and) manager –artist Thinh Nguyen.

AZ: Who is Long Long? What are their dreams?

Thinh Nguyen: Long Long is my reclaimed feminine superego from childhood memories. I grew up as a girl in a boy’s body, dreaming someday I would become a pop-star. My parents were extremely superstitious, believing that raising me as a girl would save my life from evil spirits because of a fortune teller’s prediction that I was going to die after birth. Two months after birth I was diagnosed with Polio disease and passed away, but miraculously I became alive again. So they followed the fortune teller’s advice and raised me as a girl until I turned nine years old, when the curse was supposed to end. I then became a boy again, so Long Long is now resurrected.

AZ: Why does Long Long want to be a pop-star?

TN: That dream was really fostered by my sister. She would dressed me up as her living doll. I would sing and dance for the neighboring kids while she charged them marbles and toys for the entertainment. I liked the attention. So now I’m conjuring this dream of Long Long as a way to examine our obsession with celebrity and pop culture with a bit of subversion.

AZ: In what way is Long Long’s singing subversive? Can you discuss some of the lyrics in detail?

TN: One of Long Long’s favorite songs is “My Body My Power.” I wrote it for them in response to the culture policing of our bodies. The song was Long Long’s first performance ever, where they sang “Don’t tell me what to do! I do what I want with my body!” for three hours nonstop in various musical styles as both protest and empowerment.

AZ: What is Long Long’s fashion motto? How do they dress?

TN: “I am a work of art” is Long Long’s fashion motto. I made all of Long Long’s costumes from reclaimed dresses as wearable biomorphic sculptures.

TN: “I am not a man, not a woman, not gay nor straight, nor Asian or American, I am an interstice in a world of binaries, I am love.”

AZ: What is the craziest thing that has happened during one of their performances?

TN: A wind storm of dust swept through while Long Long was performing. Long Long sang through it, and as a result the vocal cord got damaged.

AZ: Who are Long Long’s idols or inspiration?

TN: Long Long’s inspiration is compassion to humanity. They are love, and without it they cease to exist.

AZ: Who is Long Long in relation to the personality of “Thinh Nguyen”?

TN: Long Long and I are two sides of the same coin, and we are but one. We operate on the same beliefs and values, but Long Long is way more glamorous and larger than life than I am.

AZ: As far as current pop stars go, with whom would Long Long want to collaborate?

TN: Long Long is open to collaborating with anyone who operates on love and compassion.

AZ: How does managing Long Long fit into the rest of your artistic practice? What effect do you hope for Long Long to have as an idol or goddess?

TN: My work questions the inequity of cultural values in order to unmask institutionalized power structures. How do we empower ourselves in a system that is designed to constantly oppress us? Long Long is the evolution and convergence of my artistic approaches into a singular long-term project. It is my most ambiguous project yet. Long Long emerges out of the realization that Western art history is not my history, my assigned gender is not my identity, and my identity is not a product of my cultural values. Long Long is my performance in power, in hope of altering the power relations and finding the threads that connect us all.

AZ: Where can we find Long Long next? What are they working on?

TN: Like you mentioned before, Long Long will be performing at REDCAT STUDIO Fall 2016 program on November 13th and 14th. For more information visit REDCAT website. We are working on Long Long’s first single “My Body My Power” and the music video, as well as another solo performance concert in April 2017.