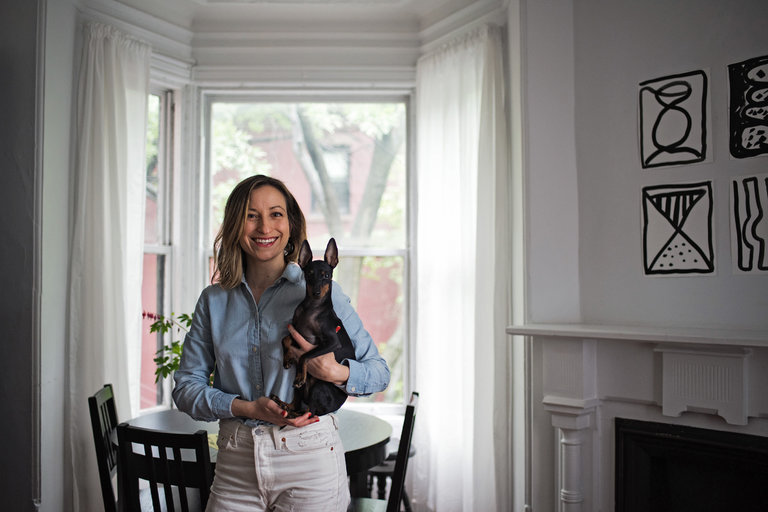 Emily Weiner learned to paint in oil during her first semester at college.  She was on a constant quest to push what’s possible for the medium by seeing what others are doing, what materials they’re using, how they’re interpreting imagery, style, gesture, even design—to keep painting seemingly relevant in the midst of a culture that seems to fluctuate towards and away from the handmade object.

In between creating, Emily absorbed at as much art as she could in museums, galleries, and in artists’ studios—constantly getting close-up to paintings that looked interesting and trying to decode or replicate parts of them back in her studio. Some of the most valuable lessons Emily acquired were in her classmates’ studios or during visits with artists she admired, when she could ask questions or have a conversation about creative ideas.

This concept of an open artist community, sharing and promoting work through insightful and creative conversation, lead Emily to start her own gallery space in her adorable Brooklyn home, where artists could exhibit and hang out inside her apartment on Willow Street.

The Brooklyn neighborhood is romantic but not really an art destination in New York, which made it seem even more fitting for her to start something cool and creative there. Emily painted the rooms white, realizing there was a lot of real estate which should be used for a salon-style show; so a fellow painter, Sharona Eliassaf, and Emily decided to put on an exhibition series there called The Willows. They had their first show in 2012, and since then, it has taken on a momentum of its own!

Art Zealous chatted with Emily about what it’s like to have an at-home gallery space.

Art Zealous: Please tell us about your exhibition series, the Willows, in your Brooklyn Heights apartment.

Emily Weiner: The Willows came out of my graduate-school experience; a year after I graduated, I was missing the easy and honest conversations with other artists that I had in school. Gallery openings were mostly where artists would reconnect over work, but the bright lighting and the formal exhibition space didn’t always allow for anything more relaxed and therefore in-depth than small talk. At the time I was lucky to have just moved into an apartment in Brooklyn that had lots of space—a historic building on Willow street with big bay windows and really beautiful light, where I could also have my studio.

AZ: This project seems to pass the commercial gallery system—how do you decorate your home in a way that’s conducive to showing the art?

Emily Weiner: Really a clean-looking wall and ample space, is the only requirement for hanging the work. When multiple works are in a single space, a visual dialogue between them usually appears that’s initially unintended. There might be some shuffling and rehanging of the work to accentuate that, but it’s a pretty intuitive process. I keep the non-art objects around very minimal: really just basic furniture, books, and plants.

AZ: How do you choose which art to feature?

Emily Weiner: We start with a general theme (past themes have included Home, Collaboration, Ice Storm, Equinox etc.) and ask artists to contribute work that speaks to some interpretation of what that might mean. We don’t really curate, aside from inviting artists we think are making great work. Since the space is non-traditional, often artists will show something that is out of the ordinary or new for them, and kind of test it out in a context that is different from where their work usually goes.

AZ: How often do you refresh and/or rearrange the art in your home and what is your ‘process’ in doing so?

Emily Weiner: I rearrange the work in my home every time we have a new show at The Willows. It’s something I do by necessity since each show is all new work, but it’s been great to rethink the space all the time. It’s a good practice as a painter too, to question display every so often. I’ve been lucky to have had opportunities to trade with some incredible artists over the past decade—In doing so, I’ve wound up with an art collection that is impressive in its own right, but has double value in that it reminds me of specific artists I’ve encountered in NYC.

AZ: What is the art experience like when you host exhibitions and guests?

Emily Weiner: It’s half gallery opening, half house party. The work is serious, but people aren’t afraid to sit down and stay for a while.

Emily Weiner: The next Willows will be on the evening of Saturday, September 17—this time it’s on the eleventh floor of Lord & Taylor Fifth Avenue—in a currently empty (and quite big) penthouse space in the retailer’s landmark building. There will be about 30 artists and music on the rooftop outside. We expect it to be a celebration. It’s open to the public; details can be found at www.thewillowsnyc.com.

Meanwhile, in the studio, I’m working toward an upcoming show in Iceland, at Gerðarsafn museum alongside two artists living in Reykjavík, which opens early in January 2017. I’m making a series of oil paintings in ceramic frames—a few of which I will likely test out at The Willows this month before hanging on the museum walls.