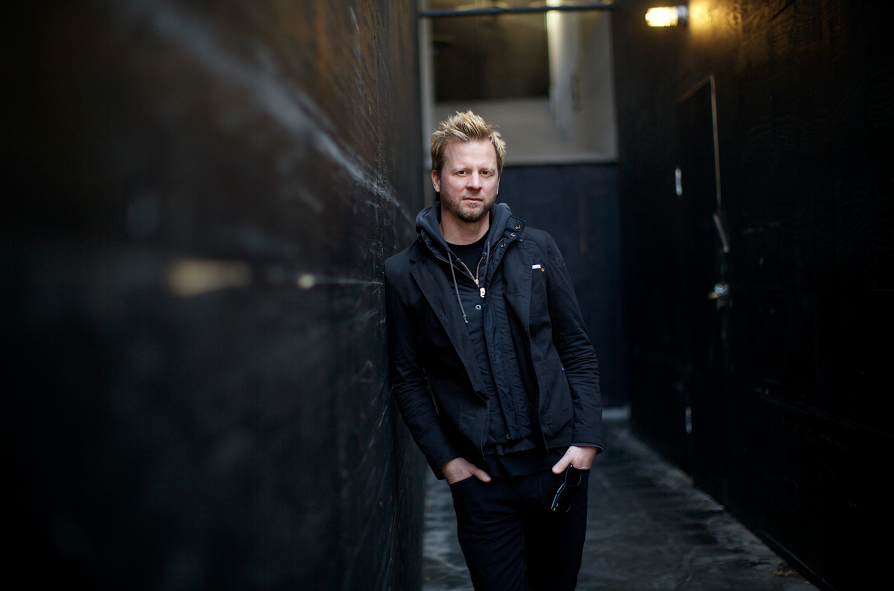 Gary Kordan, the two-time Emmy-nominated production designer behind Key & Peele, Workaholics and Nobodies is a total badass who merges art with his spectacular set designs. Kordan creates sets for incredible TV shows; his most recent creative venture is designing the highly-anticipated supernatural comedy series Ghosted, starring Craig Robinson and Adam Scott (which just premiered October 1st). Functioning as a quirky mirror of the X-Files, the show follows a paranormal investigator and a skeptic who are tasked by a shadowy organization to investigate a series of strange mysteries.

From the start of his career, Gary has been deeply involved in the comedy industry; his first job in entertainment was holding cue-cards for Joan Rivers, who would later become a close friend and mentor to him. Gary lived as a struggling artist in New York for years, so finally he made a move to sunny Los Angeles to take his career to the next level, and over the past ten years, he’s evolved into one of the most established talents in the design world. His work can be seen on several shows, including the cult-favorite miniseries Time Traveling Bong (created by and starring Broad City’s Ilana Glazer), The Meltdown with Jonah and Kumail, @midnight (hosted by Chris Hardwick), and Amazon’s Just Add Magic. In these projects, Gary works with dozens of artists to create each set and make it unique to the creative vision of the project.

Art Zealous sat down with Gary to discuss his impressive design work on some of the most acclaimed comedies of the past decade.

Gary Kordan: My art background goes back as early as age 5. I would draw elaborate comics featuring my family and friends all with a comedic viewpoint. Throughout junior high and high school, my caricatures and portraits depicted guidance counselors, the principal, teachers, security guards and fellow students in elaborate detail.

I learned at an early age that details matter – people notice and laugh. My obsession with portraiture, pop art, and comedy led me to School Of Visual Arts in New York City where I majored in illustration/fine arts. I immersed myself in pop artists like Andy Warhol and illustrators Philip Burke (Rolling Stone) and James McMullen (Lincoln Center). At night I worked at the famous comedy club, Catch A Rising Star. Composition, detail, and showbiz became my foundation.

GK: I grew up in central New Jersey. I can remember a moment in 7th grade when I said: “I have to get out, I don’t belong here.” I spent weekends taking the train into the city and cutting class on Fridays when a Woody Allen movie would open. I listened to The Velvet Underground, Lenny Bruce, Joan Rivers and Howard Stern to get the city in my blood. I subscribed to New York Magazine and The Village Voice in 8th grade and was way too young to understand any of it; however, the draw of downtown NYC took over. I moved as soon as I graduated.

GK: Dirty Grey Goose martini with an embarrassing amount of extra olives. Preferably in a dark booth with friends.

GK: My favorite art spot in Los Angeles is any wall, power box, billboard or construction site that features wheat paste street art. The best work is on the street. I love Morley’s street art and collect as many of his pieces as I can. I spend way too much time pulling over and taking pics of graffiti and murals.

AZ: How are artists involved in creating a set – from vision to execution?

There are vendors creating custom elements and buyers picking out amazing dressing and lighting with the set decorator. Set dressers are creating the lived in world on shelves and throughout the set and on set dressers keep it all together when the crew comes and tears it all apart to fit their gear and cameras where they need. All of this work for one set that may be two minutes of screen time.

AZ: What is your creative process like for art direction on sets?

GK: My creative process involves closing my eyes for a minute and picturing what the set needs to look like. How it feels. How it’s lit. 90% of the time I can see it. Then I pull an enormous amount of research and visuals to put on the wall (like a madman). I do pencil sketches, work with my art director Aleksandra Landsberg to create full color 3D renders and my set decorator Julie Drach to procure all the set dressing and elements on the set.

All of this while working with the construction, props, graphics and paint departments to ensure it’s done on time. Creativity has to happen fast. I am always dealing with tight budgets and even tighter shooting schedules. The art department needs to have everything approved before we can pull the trigger to actually create the set.

AZ: Do you incorporate the actors at all into your creative process?

GK: One of my favorite things to do is to incorporate the actors into the set design. There are family and baby photos on desks and walls. Their names or nicknames are worked into graphics or band names. On Ghosted, my new show on FOX, I have a wall in the Bureau Underground that is an employee hall of fame. I imagined that the location is 60-years-old and the walls are covered with black and white photos of people that used to work there. These photos are of the crew, the director and other people willing to pose in an old suit or dress for my crazy ideas.

AZ: Tell us about what it was like designing and creating for Ghosted.

GK: I loved the challenge of designing Ghosted. Our goal was to honor the sci-fi and action movies from the early 80’s, while throwing X-Files and Stranger Things into the mix. When you watch Ghosted, pay attention to the sets. You’ll see Ghostbusters, Total Recall, 48 Hours and a little Mary Tyler Moore Show (The Bureau Underground) all mixed together with a current, 21st-century edge.

AZ: What has been your favorite creative project to date?

GK: My favorite creative project to date has to be Key & Peele. In five seasons we designed almost 350 sketches and multiple live stage sets. From a pirate ship to an 80’s workout video, every set was from a different time in history (or the future). We treated them all as cinematic works of art. We NEVER looked at it as basic cable sketch comedy and it shows. We made 350+ mini-movies and each one had a distinct visual style. The Key & Peele creative team of directors, costume designers, makeup, hair and art department may never happen again in my career. Once in a lifetime.

AZ: Are there synergies between art and production?

GK: Art and production have to work together in order to meet the insane and most outrageous demands of TV and film production. Budgets are a real thing, and actor availability that changes the calendar constantly is real. Losing a location or a major script change is constant. The art department needs to be able to be in constant communication with production and react to 30 left turns a day. All of this and they STILL need to deliver a beautiful set that looks great on camera AND is efficient to shoot in.

AZ: What is your dream collaboration?

GK: My dream collaboration is a project that has a director with an outrageously cool vision, a writer with an inventive and detailed script and a producer with a huge budget and plenty of time to prep and shoot it. The latter is ALWAYS the problem. That, and I’m jealous of the production designers of Stranger Things and Saturday Night Live. If I could book a show that incorporates those two, I’d be happy.

GK: If you’re interested in my work, I have a show on Fox called Ghosted, an Amazon series called Just Add Magic, Teachers on TVLand and an upcoming Netflix special with Fred Armisen.

Or, you could always revisit Key & Peele on YouTube!

Ask the Collector with Holly Hager: Collecting 101—Investing in Art

Top 6 Art Instagrams of the Week