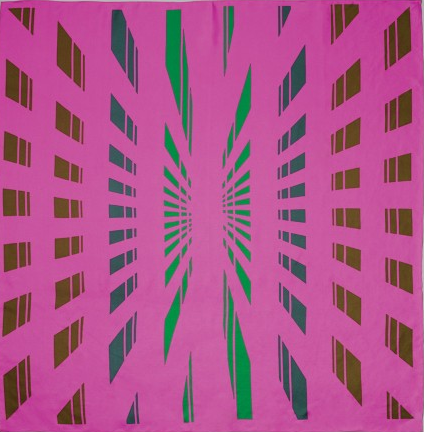 The Art Zealous team adores Patmos’ modern twist to minimalism so we sat down with the award-winning designer to discuss her artistic collaborations with both The Whitney and with artist Ryan McGinness to create a unique capsule collection.

Marcia Patmos: Both!  I love coffee in the morning, but I also enjoy tea – especially all kinds of green and white ones – nice in the afternoon.

AZ: Current wallpaper on your phone?

AZ: How does art translate into textiles and fashion?

MP: Art is in everything all around us and so much of art crosses over into the fashion world and also into textiles.  I think there is fluidity between all three.

AZ: Tell us about your collaboration with artist, Ryan McGinness.  What made you attracted to his art & technique? How did you work together using both your fashion/art perspectives?

MP: For the Spring/Summer collection last year, I collaborated with artist Ryan McGinness, whose work is in the permanent public collections of the Museum of Modern Art, The Metropolitan Museum of Art, Virginia Museum of Fine Arts, Museum of Contemporary Art San Diego, Cincinnati Art Museum, MUSAC in Spain, and the Taguchi Art Collection in Japan, to create a capsule collection of womens-wear and unisex styles. For the limited edition collaboration, we designed a 3M reflective ink printed t-shirt, sweatshirt inspired sweater, reversible scuba dress and jumbo printed pashmina using custom engineering of McGinness’s iconic designs.

Ryan liked my overall aesthetic, especially the menswear inspired elements that are in my line.  He works with a lot of interesting materials like silk screening when creating his art and once we talked he came up with some great designs that translated well into textiles. 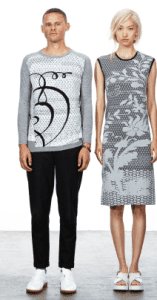 AZ: Tell us about your series of limited edition scarves sold at The Whitney Shop?

MP: The Whitney Shop launched an exclusive limited edition scarf collection. This collection of six numbered and signed limited edition scarves and two handkerchiefs presents beautiful creations that were preserved in a hidden cultural archive for nearly 50 years. Designed by the artist and filmmaker Harry Smith at the behest of his friend and mentor Lionel Ziprin, this work was produced in the late 1950s for Ziprin’s fledgling QOR Corporation, a short-lived business entity.

These visionary designs—which presage psychedelia and the vibrantly colored textiles of the 1960s and 1970s—were locked away in Ziprin’s legendary private collection of artistic, occult, and literary totems. After Ziprin’s death in 2010, independent scholar Philip Smith introduced artist Carol Bove to Lionel’s daughter, Zia Ziprin (herself a noted designer and photographer). She in turn introduced Bove to the vast treasure trove of the QOR Corporation archives, and Bove agreed to house the archives in her studio. The designs were exhibited publicly for the first time in 2013 in an exhibition curated by Bove and Smith.

Strikingly different in motif, each scarf manifests Bove’s determination to bring Lionel Ziprin and Harry Smith’s long abandoned design enterprise to fruition. They are the culmination of a project that reaches beyond the boundaries of time and place and celebrates the fusion of the abstract and the concrete. 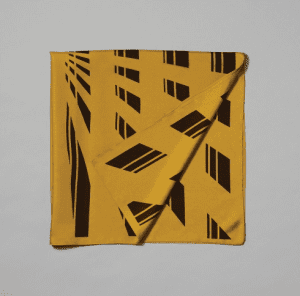 MP: I just finished the FW16 collection, beginning to pull ideas together for Resort 17, and also working on a couple of possible home collaborations.