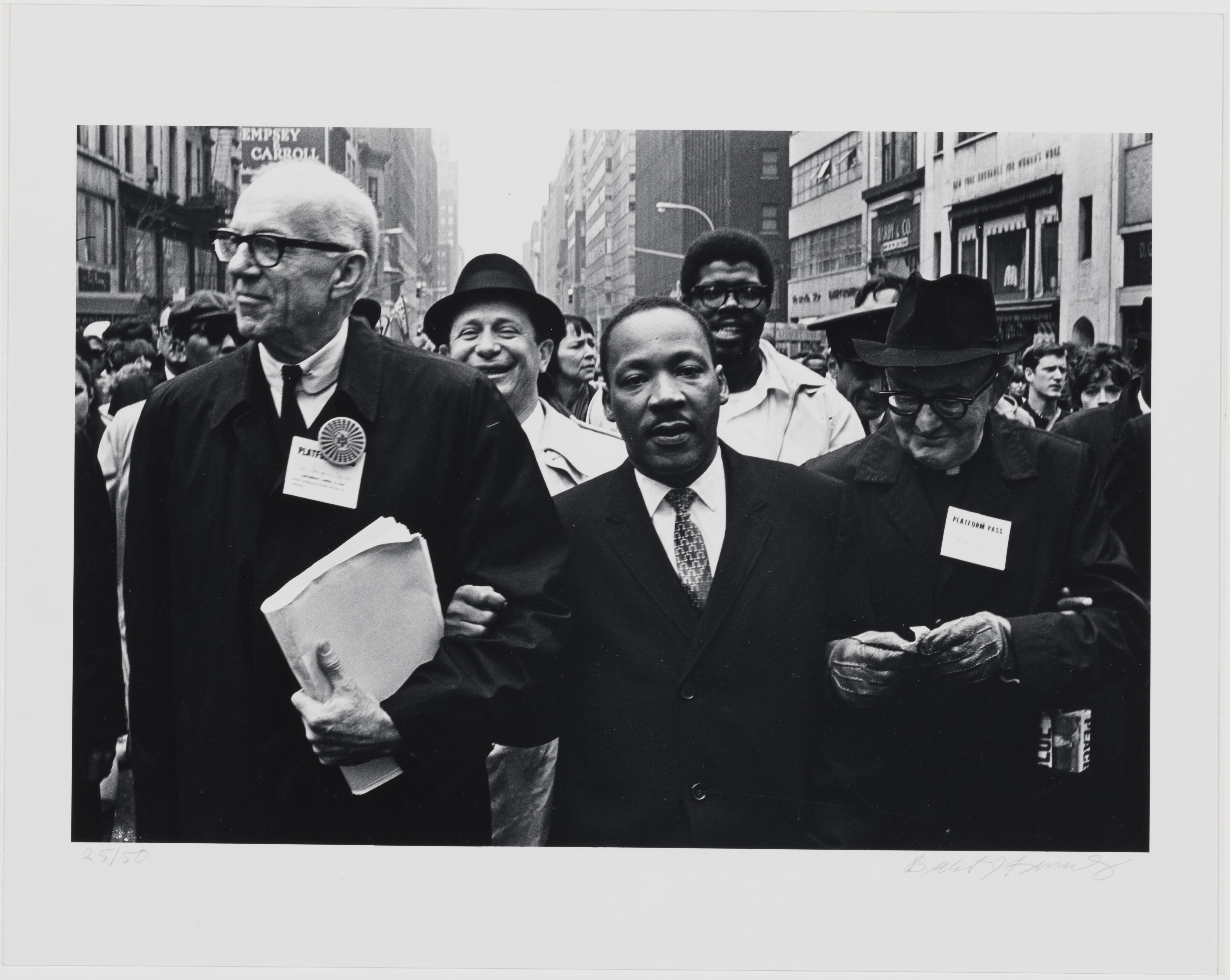 Photograph of Dr. Martin Luther King, Jr. standing between Dr. Benjamin Spock and Monsignor Rice of Pittsburgh at the Solidarity Day Parade in which participants marched from Central Park to the United Nations on April 15, 1967.

After viewing the “King in New York” exhibition at Museum of the City of New York (MCNY), it is evident that Martin Luther King, Jr. often used New York City as a conduit to the rest of the world. As King grew to become one of the most influential figures of the 20th century, New York hosted many momentous episodes of his life. It was there that the iconic activist delivered many important sermons and speeches, spoke out against the Vietnam War and preached about civil rights with the robust, charisma and visionary verve for which the harbinger of change became known. Mayor Robert F. Wagner even proclaimed King “an honorary New Yorker” in 1964. The City was a connector for King’s local ties, his impact on the United States, and his global influence.

Fifty years after King’s tragic death, MCNY explores the relationship between King and New York. The exhibition examines a time when King was often in New York – during the ‘50s and ‘60s – as well as through the aftermath of his assassination in 1968. According to Whitney Donhauser, Ronay Menschel Director of the Museum of the City of New York: “’King in New York’ illuminates a dimension of Martin Luther King, Jr. that is often overlooked in his relation to New York and the city’s role in the black freedom movement.”

The show, on view through June 1, takes three avenues into the topic:

King on the New York Stage – As a hub for media broadcasting, New York played a pivotal role in getting the words and messages of King’s speeches to the rest of the world.

King on the Global Stage – King delivered protests and speeches at landmark locations in New York, sharing his thoughts on worldly issues such as his commitment to non-violence.

Remembering King – When King was killed on April 4, 1968, New Yorkers – with much of the rest of the world – mourned and protested. Civil leaders and New York residents marched together in his memory.

King’s frequent presence helped to maintain New York City as a place of activism, influence and vision. Tracing the road that Dr. King paved through its five boroughs helps to shed light on the complexities of his life as he worked with other activists, delivered important sermons and advanced the rights of black Americans.

Museum of the City of New York is located at 5th Avenue at 103rd Street, New York. www.mcny.org

_________________________
Photograph of Dr. Martin Luther King, Jr. standing between Dr. Benjamin Spock and Monsignor Rice of Pittsburgh at the Solidarity Day Parade in which participants marched from Central Park to the United Nations on April 15, 1967. // photo by Benedict J. Fernandez, courtesy of Museum of the City of New York.