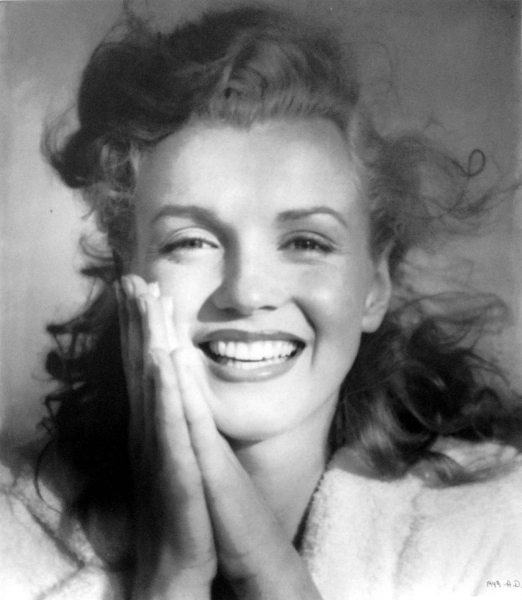 Steven Kasher Gallery is pleased to announce Andre de Dienes: Marilyn and California Girls, the first solo show of photographer Andre de Dienes in New York in over ten years. The exhibition features more than fifty lifetime prints from de Dienes’ two most famous series, Marilyn Monroe and California nudes. In 1945, De Dienes (1913-1985) was the first professional photographer to photograph Marilyn when she was just a model named Norma Jeane Baker. One of Marilyn’s first lovers, de Dienes was an intimate of Marilyn and photographed her privately in 1945, 1946, 1949 and 1953. His iconic photographs capture her transformation from sensitive and ambitious ingénue into Marilyn Monroe troubled star.

The exhibition will also highlight de Dienes’ avant-garde nudes. Like many West Coast photographers, including Ansel Adams, Edward Weston and Brett Weston, de Dienes was fascinated by the desert landscape. With his nudes in landscapes he experimented with double exposure and photomontage. His nudes sometimes take on uncanny postures reminiscent of Hans Bellmer’s Dolls.

In November 1945 de Dienes was a successful New York fashion photographer. He moved temporarily to Hollywood. His first task was to find a model for his experimental nude photography. De Dienes called numerous modeling agencies until an agency sent over a young lady who had been camping out in the office, eager to get her start in Hollywood. It was Norma Jeane Baker, a 19-year-old “miracle” and “sexy looking angel” as de Dienes wrote in his 1983 memoir. It was love at first sight. De Dienes didn’t take any nude photographs of young Norma Jeane, but invited her on a five-week trip. Though the trip resulted in a brief marital engagement, de Dienes returned to New York and their romance did not withstand the distance.

When he returned to California some months later, de Dienes found that the young and innocent model he knew as Norma Jeane had been made over into the coy budding actress Marilyn Monroe. Still fascinated by Marilyn’s expressive face, he asked her to accompany him to a beach in Malibu to take photographs for a book of poetry and philosophy he wanted to illustrate. The rare large scale photographs he made in 1946 depict Marilyn acting out various moods including happiness, introspection, serenity and sadness.

In the summer of 1949, Marilyn’s star began to rise. While in New York for the first time she called de Dienes and said “Andre, let’s take pictures again! Let’s make history! Do you have a nice bathing suit I can wear?” When he picked her up at the Pierre hotel, he discovered “a magnificent, elegant young woman, sophisticated like [he had] never seen her before.” But de Dienes preferred “a very casual Marilyn” for his pictures. He took her out of the craziness of the city to Tobay Beach on Long Island. Once on the beach she let go of her new sex-pot persona and returned to the innocent girl de Dienes first met, laughing and playing in front of the camera.

Their last shoot together happened late one night in 1953. Marilyn phoned de Dienes and told him she could not sleep. She proposed that they meet to take pictures somewhere in a dark valley in Beverly Hills. Without a flash or professional lighting, he lit Marilyn’s face with the headlight of his car. She posed sad and lonely. This was the first time that de Dienes came face to face with the dark side of Marilyn. De Dienes stayed in touch with Marilyn until her death in 1962, but never photographed her again after 1953.

Andre de Dienes was born in 1913 in what is now Romania. After arriving in Paris in 1933, he became a photographer for the Communist newspaper L’Humanité. He began working as a fashion photographer for Parisian couturiers and moved to New York in 1938 with the help of Esquire magazine editor Arnold Gingrich. In New York he photographed for Esquire, Vogue and Life. In 1951, de Dienes moved to Hollywood and began to photograph movie stars and to experiment with nudes and landscapes. His memoir Marilyn Mon Amour was published in 1985. In 2002, Taschen published de Dienes monumental monograph simply titled Marilyn. In addition, 24 books of his nudes have been published.