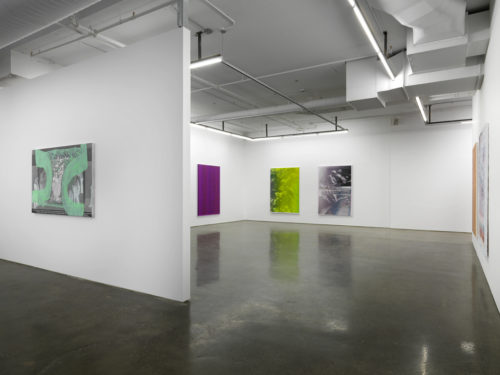 After Image: Toby Ziegler & Paul Kneale is currently on display at Cassina Projects, 508 W 24th Street, NYC. The show remains open Tuesday to Saturday, 10am-6pm. It was curated by ARTUNER, and opened at the venue on February 28th, 2017. It will remain open until April 15th.

Stare into to the maxed-out brightness of your smartphone, tablet, or monitor and hold your gaze there. Notice how its immediate surroundings become darker. Now turn away and close your eyes; an optical echo of the screen will remain. This technically termed afterimage is a perceptual slippage that arises from the residual activity of the nerve cells situated in the back of the eye, retaining light even after its source is gone.

Taken literally however, the idiom After Image could also suggest the way in which the historical medium of images – painting – is today blended into a flattened and universal space, replicated, altered and spread across systems and devices. This exhibition presents two artists whose work moves between these two poles of After Image/afterimage, the physical and the digital. Both employ strategies that challenge the reading of a transmitted image’s symbolic detritus, while also disrupting the basic reality claims of reproductive technology’s lenses, sensors, chips and screens. While their approaches are drastically different, they share a concern for how to critically continue the discourse of painting, embracing the revolutionary technological capabilities that have decisively altered the public reception of the medium.