Brooklyn-born Joseph Grazi is an artist who has a penchant for death and tax..idermy. In his latest show, titled Cecil: A Love Story, Grazi uses a variety of media including drawing and taxidermy to examine the public moral compass and perceived aesthetic value via the public debate surrounding the Zimbabwean icon Cecil the Lion, who was killed last year.

Art Zealous caught up with Grazi to discuss his background, lions, and of course taxidermy.

Art Zealous: What’s a typical day for you?

Joseph Grazi: Every day is its own adventure, but for the most part I wake up in the late morning (I don’t go to bed till 4 or 5 am), have a stare down with my cat, then feed her, then pretty much start chugging coffee and drawing till the days done, and it’s time to go to bed and do it again the next day.

JG: Coffee. All day long. Although if it’s a dinner I prefer tea.  My family is big on tea.

JG: I’m powered by NYC tap water but when I can I like to chug down a cold Sunkist soda in a can (it’s not the same from a plastic bottle). They’re my secret to getting through an NYC summer.

AZ: If you were an animal, what would you be?

JG: I’d love to be reincarnated one day as a rich person’s house cat. I can’t think of a better an easier life then non-stop food and endless couches fifty times your size.

AZ: Tell us about your background in art and what led you here?

JG: I grew up drawing constantly. I struggled a lot as a child and drawing seemed to keep me sane and more importantly occupied and out of trouble.  The more I drew, the better I got and I kind of just kept going. I never planned or decided to become a career artist, it kind of just happened and seemed like the natural progression for who I was and who I was supposed to be.   Oh, and Batman. Specifically, the 90s animated : “Batman the Animated Series.” That show was everything to me growing up and induced both my obsession with bats and the darker side of life and my love for art and drawing. I even studied animation at the School of Visual Arts because of it.

AZ: You tend use taxidermic animals, can you explain that technical process?

JG: The bats are very delicate and getting good at mounting them takes a great deal of trial and error. The butterflies are even more delicate and need to be rehydrated and spread before they can be mounted.  Both processes are extremely time consuming, but if you rush the process you’re going to damage things. I value each bat and butterfly in a quasi-religious way. I know they were once alive and I try and be as respectful to their bodies as possible. So if one breaks or tears during the process and can no longer be used in the art it definitely weighs on me emotionally. I bury all taxidermy that can’t be used in my work.

AZ: You work in several mediums and incorporate different materials in your sculptures and paintings. What is your favorite medium to work with?

JG: Taxidermy is my favorite medium because it’s so real. As much as I love painting and drawing, the experiences don’t really compare to the literalness of the work you can create with taxidermy.  A drawing or painting of a bat, no matter how realistic, will never have for me the same emotions that an actual bat can convey.

AZ: Tell us a bit about why was Cecil to be the subject of this series?

JG: I’ve worked in Africa with lions before and have been studying the subject extensively for over a decade. I’ve always understood the complexities of trophy hunting and how it could be beneficial to conservation and a species as a whole. I don’t actively endorse it but I certainly don’t condemn it. When the Cecil incident occurred,  the Internet created a cyber-shaming attack that at that point was probably the harshest in internet history. Most likely still is. Even PETA called for a public execution of the hunter.  The emotions ran high for weeks in both conservative and liberal circles. Walter Palmer had quickly become the most hated man in the Western world. But I found these to be misplaced emotions. People treated Cecil like he was Mufasa from the Lion King.

It quickly dawned on me that most Westerners have absolutely no idea what a lion is outside of its “majestic” appearance.  Even worse they know nothing about actual lion conservation and reserve management nor the extreme fundamental differences between poaching and hunting. The Cecil incident showed me how ignorant many in the West can be and how quickly they are to judge others even if facts and hard science disagree with them. Unfortunately, emotions burn brighter than facts.

Most of the largest conservation organizations in the world support legal and sustainable trophy hunting due to the money it brings in to conservation. Money is required to keep up fences and pay armed guards to protect against poachers.  It’s only activist groups like PETA that don’t approve because they are a group founded on emotions not science. It’s very easy for an American that’s never been to Africa to call for a ban on hunting and vilify the hunter. But that is literally because they just don’t understand the complexities that is reserve and species management in Africa. Hunting is only bad for the individual, not the species, and it is the species that is the most important, no matter how impressive looking the individual might be. So all these misplaced emotions and absurd ignoring of cold hard facts drove me a little crazy and instead of taking to my Facebook podium to rant like everyone else (the Internet isn’t exactly the safest place to voice an alternative opinion) I decided to turn it into an exhibition. 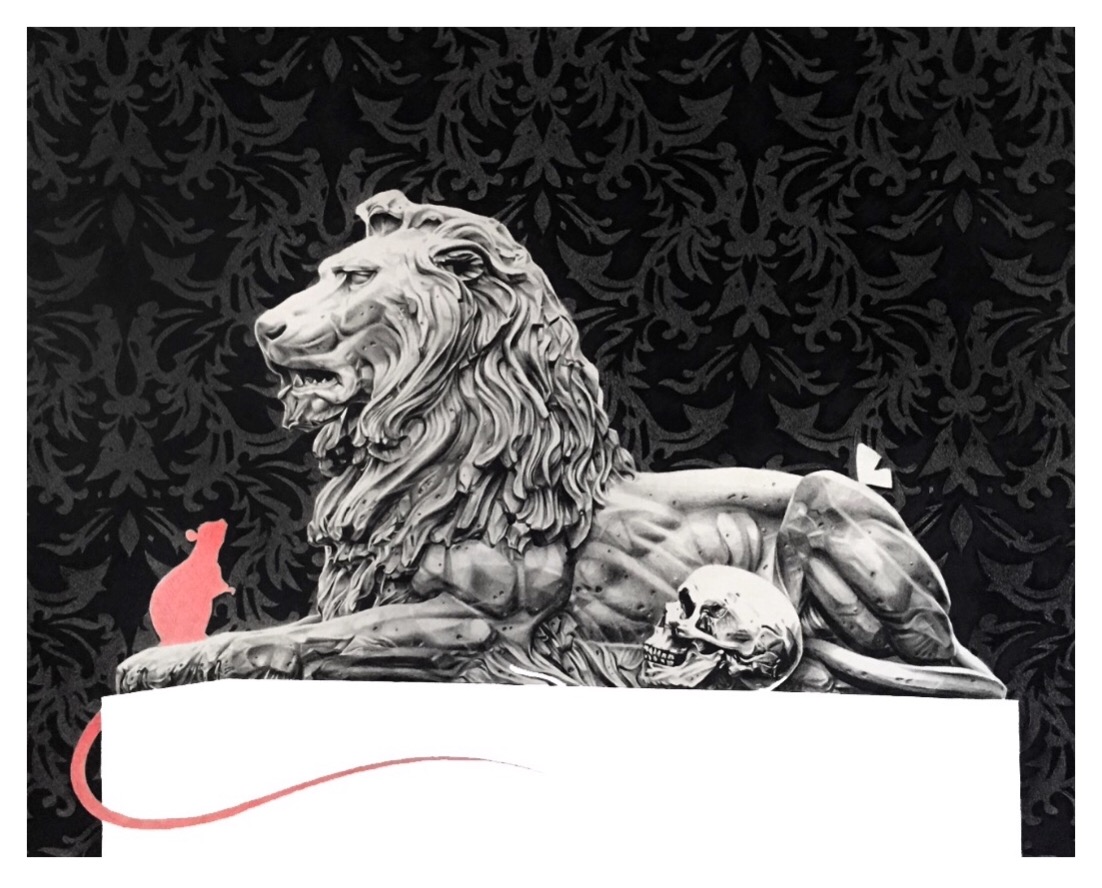 AZ: How does your background influence your work?

JG: I was born to a surgeon and a musician, and I’d like to consider myself a nice split between the two.  I’m driven by the arts, but my art is focused on science.  When I close my eyes I still often see myself in a lab coat than by an easel.  I also come from a family of 6 kids where you literally had to shout to be heard. Artists are the ultimate shouters.

AZ: Who are some artists who continue to influence your work?

JG: The artist with the biggest influence on my imagination is Steven Spielberg. For some reason, he’s not considered a fine artist, but to me he definitely is. Seeing Jurassic Park as a child in the movie theaters changed my life. Jaws changed my life. E.T. changed my life. They all came out when I was young enough to absorb them into my psyche. For better or for worse, outside of movies, Walton Ford, Damien Hirst and Spencer Tunick are the three fine artists whose work I respect the most.

AZ: What has been the greatest challenge you’ve faced so far?

JG: Getting out of bed every morning 🙂

JG: I’m hoping it will be this October during my show!

JG: I mostly keep people updated through my Instagram page.  You can also see my work at www.JosephGrazi.com

Cecil: A Love Story, opens October 6th and will be on view at Joseph Gross Gallery, 548 W. 28th St

Two Artists That Take Sharpie T-Shirts to Another Level