This month for our #ArtPowerWomen series, we sat down with Erica Prince, a Brooklyn-based multidisciplinary artist and designer whose work presents opportunities for speculation and exploration of potentialities within lifestyle design. You may be familiar with her ever-popular “The Transformational Makeover Salon,”  her ongoing installation and relational project about experimenting with physical appearance in an effort to gain perspective on one’s everyday self.

We caught up with Prince to discuss femininity, beauty and what she has coming up next.

AZ: You don’t leave home without…
EP: At least 4 different colors of lipstick. I don’t really utilize them it’s just a habit.

EP: My husband sitting at a picnic table from our camping trip in the Catskills this summer. The table has a floral Marimekko tablecloth, freshly picked wildflowers and polka dotted camping mugs. My husband is drinking beer and making us hot dogs. 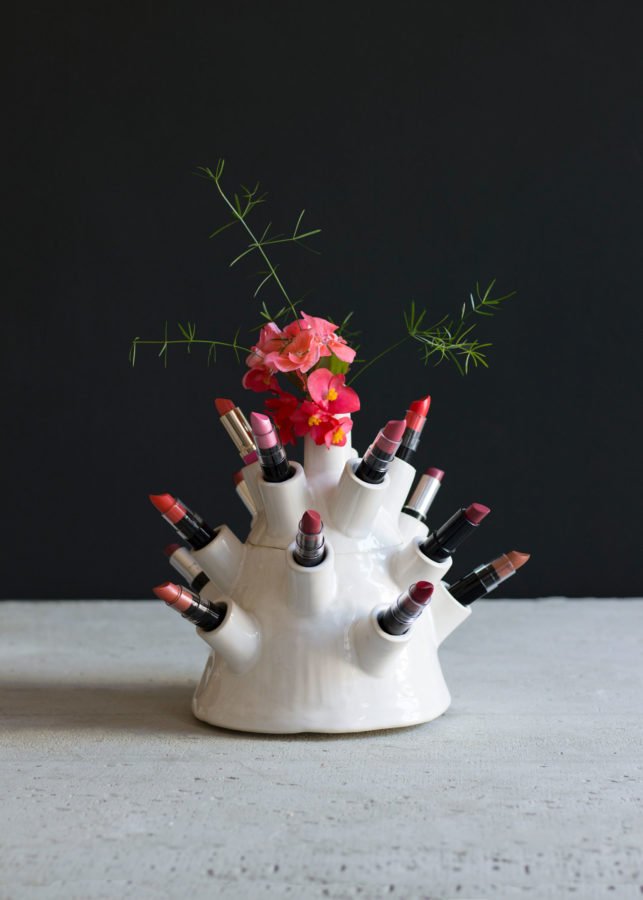 Holly Hager: Your “Released from Orbit” series seems like it could be a departure from the rest of your practice, but we have a feeling it’s not. How does it relate (or not) to the rest of your work?

EP: It wasn’t a departure, but rather a research-based tangent. It’s still essentially about exploring what-if scenarios and utopian solutions. It’s a narrative about the planets being released from the confines of their orbits and traveling nomadically throughout space, thus restructuring their hierarchy in the solar system and their relationship to the ultimate natural resource- the sun. It is based on the discovery that there are more rogue planets in the universe than planets traveling within orbits. It’s also a reference to Buckminster Fuller’s concept of “spaceship earth”. It’s still ultimately about design decisions and ideal structural solutions but this time on a solar system scale. Perhaps it’s a bit darker and more existential that my other works but it was made during a time of deep introspection.

EP: I’ve always worked in many media- my love of creating doesn’t come from a loyalty or a deep connection to a certain media, my loyalty is to an idea and then it’s clear that the idea needs to exist in a certain media. In fact, I think it’s a bit old fashioned to expect artists to stick to one thing. Perhaps its a result of the education system where we must choose a major and identify with it. In reality I don’t think these categories matter much. 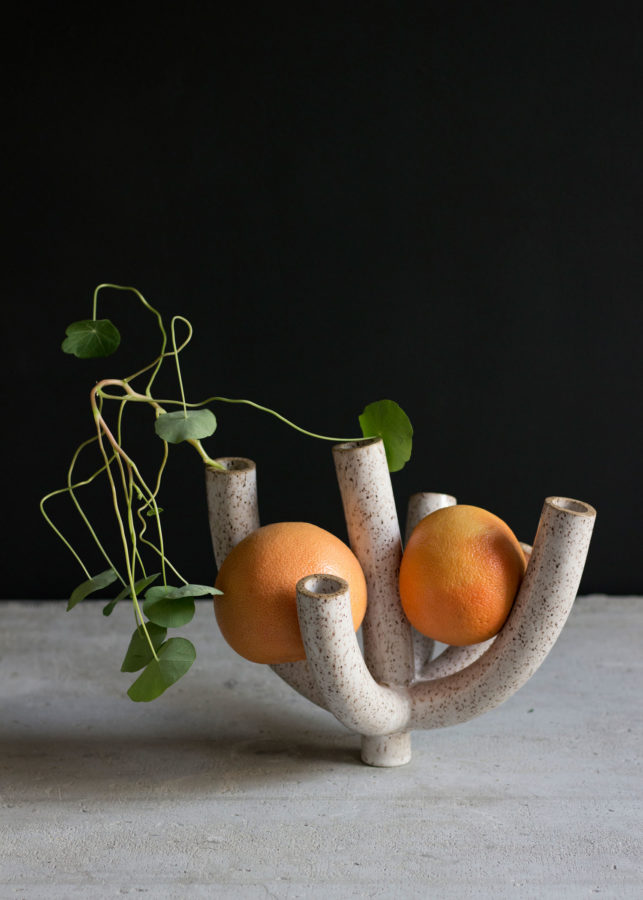 AZ: What is it about ceramics and different types of vessels that compel you?

EP: I’ve always loved multi-compartment container forms like caboodles, tool boxes or intricate display shelves. They appeal to my love for object arrangement. I looked for these forms in the world, and when I realized they didn’t really exist, I started drawing them. I found a drawing I made in 2008 of an interior that was full of these elaborate tubular forms. The idea for the forms came long before my understanding of how to make them out of ceramics. I was so deeply immersed in the fine art world it took me a while to wrap my head around making functional pieces. That seems funny to me now because clearly I’m obsessed with the intersection of conceptual art and our everyday domestic lives.

Beckie Warren: What inspired you to create the ‘Transformational Makeover Salon’ and how does it change or differ from iteration to iteration?

I wanted to create a safe, playful space for people to temporarily let go of themselves. I was giving friends makeovers just for fun before I realized that this might be a project. I thought it was no big deal. but when I saw the effect it had on them I realized that I was tapping into something that people wanted. Each iteration has its own energy depending on the space, the amount of privacy, and the participants that are drawn to that space. They have been as diverse as a quiet apartment gallery with just me and a participant in a room, to a Salon at PULSE art fair in Miami with so many spectators walking by and watching.

Holly Hager: A lot of your work, like your “Transformational Makeover Salon” and “Dollhouse”, focuses on revealing our preconceptions about who we are. What made you interested in exploring constructions of identity?

EP: I’ve always been interested in playing dress-up, which I suppose is a way of exploring identity through experimentation. I’m kind of grossed out by the modern conception of the “authentic self” as one solid state. We contain multitudes, and that’s a beautiful thing that should be explored.

Beckie Warren: How has the experience of being “transformed” effected salon participants? Do you ever receive feedback long after the experience?

EP: The reactions usually fall into a few categories: the total in-shock can barely make eye contact with themselves people, the screaming freaking out people that instantly adopt a new personality to match their new look and the quiet, staring deep into their own eyes with a confused but curious look people. I love it when a shy person instantly comes out of their shell when they see themselves as someone new. It’s like the new persona gives them permission to act without fear or hesitation. I often get emails a few days later saying that they feel they’ve discovered a side of themselves that they never knew was there, that they can call on for. 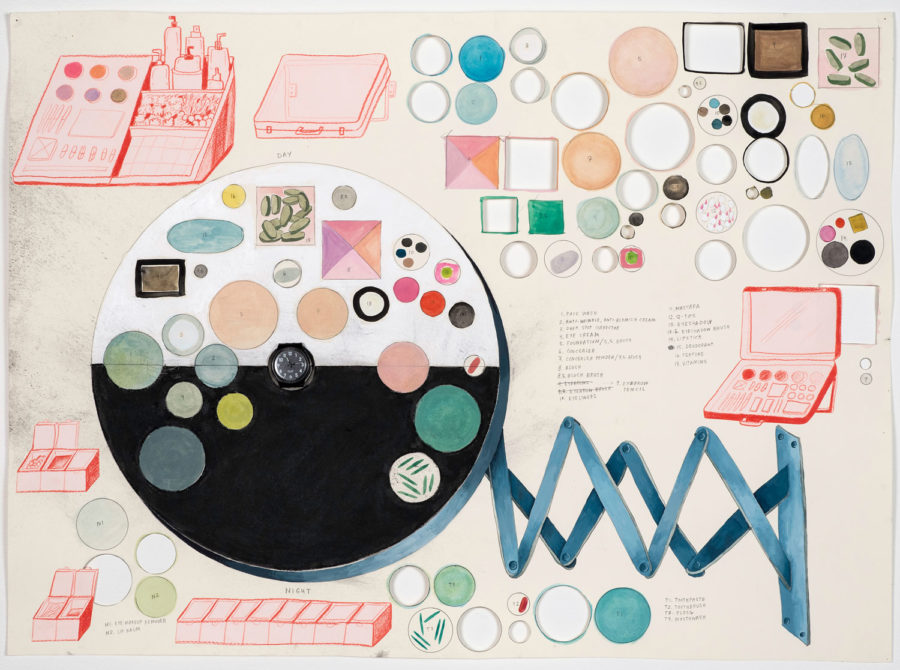 Beckie Warren: We understand that as a multidisciplinary artist you create ceramic works, drawings, as well as perform the relational project “The Transformational Makeover Salon,” how do these practices intersect, what do they have in common?

EP: All of my work endeavors to give people perspective on the here and now by presenting frameworks within which they can explore variation. These projects intersect in many ways- the ceramics appear in the makeover salon as makeup holders and wig stands, the makeup adorns the ceramics in styled shoots, the ceramics appear in drawings of interiors, the ceramic forms are echoed in large-scale architectural installations like “Released from Orbit” and so on. Intersecting worlds.

Beckie Warren: I remember once talking with you about coming from a long line of strong and proudly feminine women. How does the role of femininity and beauty affect your artistic practice and daily life?

EP: I think all of my work naturally speaks to a female-centric narrative and seems to quench a thirst for smart and considered work about aspects of the feminine every day that have been disregarded as superficial or un-intellectual. I’ve always been into “femme” things and when I was younger I thought I had to tone this down to be taken seriously as an artist or to be respected in academia. Now I’ve learned to embrace it. Pink is so in right now, but I remember doing a pink wall for my Dollhouse show in 2014 and it seemed risky- it freaked people out and they wanted to dismiss the entire show as too fluffy because the pink wall was too femme for the serious gallery. It seems crazy looking back, but I remember getting a really hard time for it.

AZ: What’s next for you?

EP: I’m diving deep into the ceramics and I’m excited to be working on larger and more ambitious forms. Ultimately I’d love to design different types of housewares and even some conceptual clothing in the future. I want to get my hands in all of it. “The Makeover Salon” will be ongoing- I’m developing a monthly series with Feng Sway in Greenpoint BK where I will be doing a pop up every month. Having access to their elaborate vintage collection is taking the makeovers to the next level. And I’m making some crazy new drawings!

AZ: How do we stay in touch?

You can purchase Erica’s work on Curatious.

#ArtWomenSeries is a pro bono collaboration with Curatious and GirlSeesArt that highlights talented unrepresented women artists. To be considered for the series, post your work with #artpowerwomen.

Whitney Annual Art Party – The Party That Will Give You FOMO