Could you imagine cold-calling one of the greatest artists of all time and hearing them pick up the phone? Karen Bystedt knows how that feels. Bystedt was a student at NYU in the 80s working on a book about top male models of the era when she cold-called the legendary Andy Warhol.  Andy answered the phone and agreed to a rare sitting with Bystedt in the conference room at ‘The Factory.’

Decades after the epic photo shoot happened, Bystedt found negatives from The Factory and has since collaborated with avant-garde street and pop artists like Peter Tunney, Speedy Graphito, Gregory Siff, Dom Pattinson and Chris Brown/Konfuzed, on the “Lost Warhols” collection. These are vibrant and splashy pieces of Andy art that are featured in places like the Andy Warhol Museum, the Armenian Museum of Modern Art, & the Hearst Foundation.

Bystedt’s artistic roots run deep as her mother instilled an appreciation for both visual and fine art in Bystedt’s spirit growing up. Her childhood consisted of attending ballet symphonies and visiting art museums throughout London and San Francisco, expanding her art education and passion.

At the moment Bystedt is into watching inspirational YouTube videos and tapping with Brad Yates, as well as focusing on painting and being.

AZ caught up with Bystedt to chat Warhol, street art, and celebs. 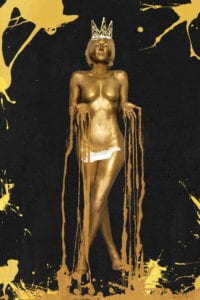 AZ: Tell us about your interactions with the late Andy Warhol.

KB: Intense but brief. I was attending New York Film School and doing projects with male models when I cold called Andy – I was in shock he picked up the phone! He was intrigued that I was interested more in photographing him as a model and not as the famed artist he was. I wasn’t seen as another “Andy worshipper” so he agreed to sit with me in his conference room at Interview Magazine headquarters for a book project. The timing was perfect, Andy was just asked if he wanted to model for Zoli Model Agency.

AZ: Tell us about your Lost Warhols project.

KB: My true relationship with Andy started when I found negatives from the shoot 25 years later. I feel like his spirit has guided me as I took a less conventional path and had a vision of making Andy into a work of art through paint and silk-screening. I collaborated with some notable artists – all who worked with me to create a full body of work that became “The Lost Warhols,” a collection that I think Andy himself would enjoy. 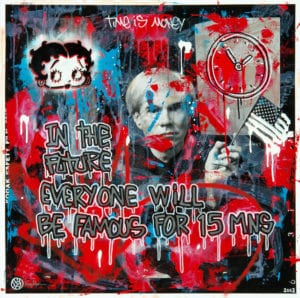 AZ: I understand you’re bringing the “Lost Warhols” to new scale with collaborations that are creating murals, stencils and guerilla like- art all over Los Angles with an eye for expanding your purview and taking the streets of the world. Where are you planning to expand and how?

KB: Most recently I was asked to do a collaboration in Portugal where I worked with 10 artists, including Add Fuel and Maser, and created a beautiful mural which paired Portuguese tile culture with Andy Warhol. I personally love street art for its raw and surprising nature and I love the idea of inspiring a passing audience free of charge. I love the balance of creating art that I sell to collectors as well as street art I create that is free. I’ve been blessed to work on murals with Disco Smith, Chris Brown and Moncho 1929 as well as Cryptk.

“The Lost Warhols” is now being planned in Oslo, Norway for 2017. 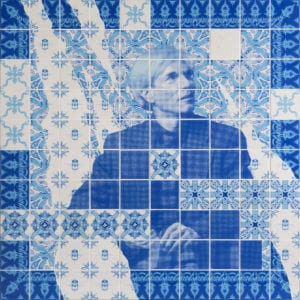 AZ: You’ve photographed many stars before they were famous such as Johnny Depp, Brad Pitt, Robert Downey Jr., Sandra Bullock, Jared Leto, Drew Barrymore and more. Who was your favorite, and do you have any interesting stories to share about these shoots?

KB: I photographed many stars in the beginning of their careers and what’s most interesting is their individual and very unique visions they had for themselves.

Brad shared with me that he used to sit in his sandbox as a child and dream of being famous and would envision himself driving up at Oscar night and being the number 1 guy, which he was able to manifest. Johnny Depp wanted to be the weird guy. He didn’t want to be the leading man, he wanted to be able to shave off his eyebrows. Jared Leto was ambitious. One time he picked me up for a party and tried to bring in a handgun. I told him I was not going in to my event with a gun, and after five minutes of back and forth I won, he left it in the glove compartment. Silly moments in life.

AZ: You’re inspired by street art, what’s the first outdoor space you painted on? What are the benefits to outdoor art-making?

KB: I started my journey in Pittsburgh as I was asked to donate two of my original photographs to the Warhol Museum. That led to doing charity in Monaco at the Formula One event and then in Milan for amFAR where my art raised over $100,000 in auction for the Special Olympics and AIDS research.

Once I was back in LA I was befriended by some street artists who were all doing murals. I decided that I wanted to do murals as well and incorporate Andy’s image. In 2014 I hired Nick Flatt to paint Andy’s likeness and then Cryptik agreed to paint a Tibetan sacred mantra around him. The finished mural appeared across from The Grove at Beverly and Fairfax and was voted one of LA’s top murals. 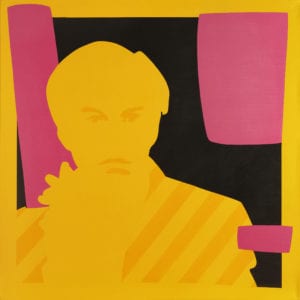 KB: I’m creating my own mixed media art titled “The King Kollection” as well as becoming part of the art in my upcoming “Queen Kollection.”

My journey with Andy has allowed me to find my true calling which is to push the boundaries of what is supposed to be, and to make art that inspires inclusion and tolerance and reminds us that we are all KINGS and QUEENS.

All images courtesy of “Lost Warhols”

The Most-Read Articles of 2017 on Art Zealous

What to Expect at This Year’s Photo London 2018