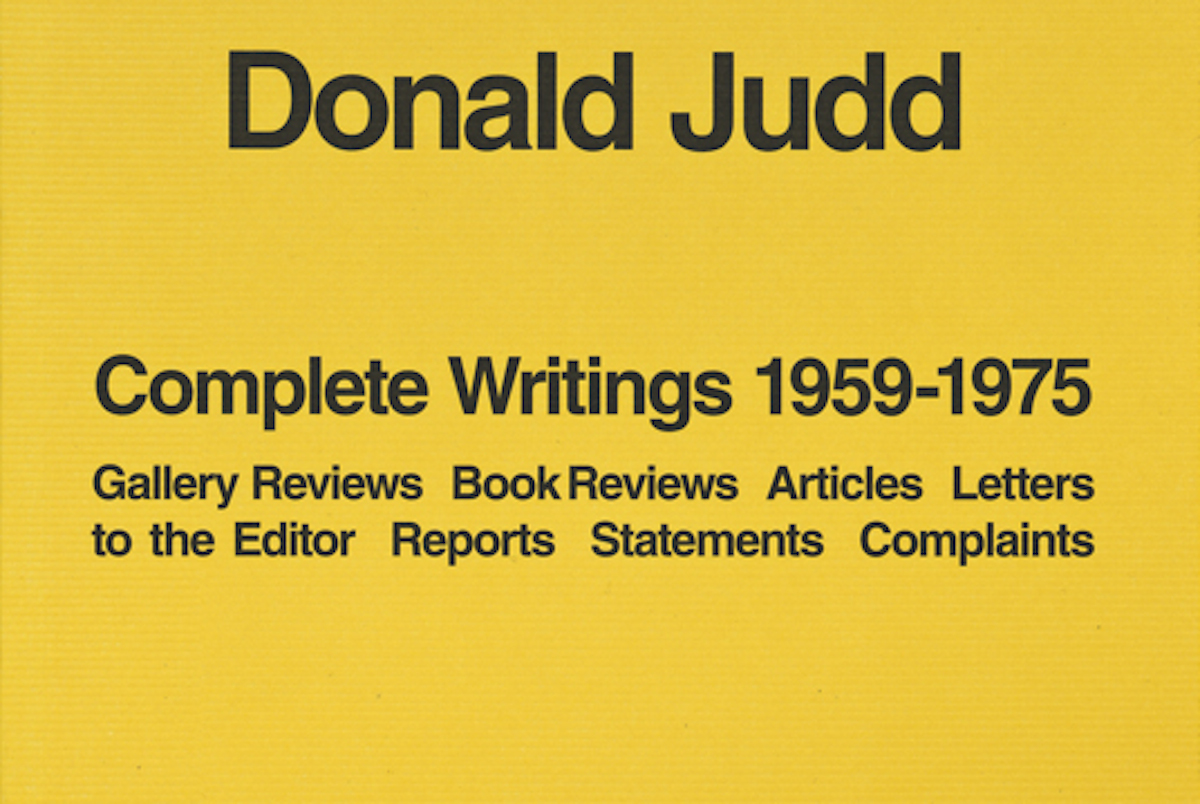 The Judd Foundation will now make the writings of one of the foremost art critics of the latter-half of the 20th century, Donald Judd, easily accessible once again. While Judd was known for his sculpture, and there were major exhibitions on his work before and since his death, he was also revered for his art criticism essays written for major art publications mostly between 1959 and 1965. The Foundation promotes a wider understanding of Judd’s work and this mission will now further include his writings. The Foundation recently announced a two-part project that aims to preserve the art critic’s writings for the betterment of the art world; reissuing previously published writings, as well as working with David Zwirner Books to publish rarely seen essays.

In March, the Foundation will reissue “Donald Judd: Complete Writings 1959-1975,” a collection of the artist’s seminal essays from mainstay publications like ARTnews, Arts Magazine, and Art International first published by The Press of the Nova Scotia College of Art and Design in 1975.   With previous editions out of circulation since 2014, this hard-to-come-by assemblage of writings, often known as “the yellow book,” includes some of Judd’s most important work, wherein he reviewed contemporary art exhibitions, addressed the work of artists like Jackson Pollack and John Chamberlain and gave a analytical account of that period of American art.

In the fall, Judd Foundation will partner with David Zwirner Gallery’s book imprint, David Zwirner Books, to present the release of a new collection of Donald Judd’s writings. “Donald Judd: Writings” will span the artist’s life, presenting a more comprehensive overview of his writings, from 1958-1993, including well-known essays, such as “Specific Objects” and “Complaints I and II,” as well as little-known essays previously published in limited editions and selections from the Judd Foundation Archives, with themes such as art, architecture, design and activism. According to Judd Foundation Co-President Flavin Judd: “In order to understand Don and his work… you have to look at furniture, architecture, art and everything else all at once. The writings are part of that and with this book people will finally have access to what Don was thinking as he developed his work and his life.” The collection will also encompass essays on Judd’s home and studio in New York, and his decision to establish two foundations: Judd Foundation, which offers access to the living and working spaces of the artist; and The Chinati Foundation, a public institution that promotes the idea of permanent art installations (anchored on his thought that the meaning of a work can be lost if not displayed correctly).

The reissue of “Donald Judd: Complete Writings 1959-1975” is now available for preorder.