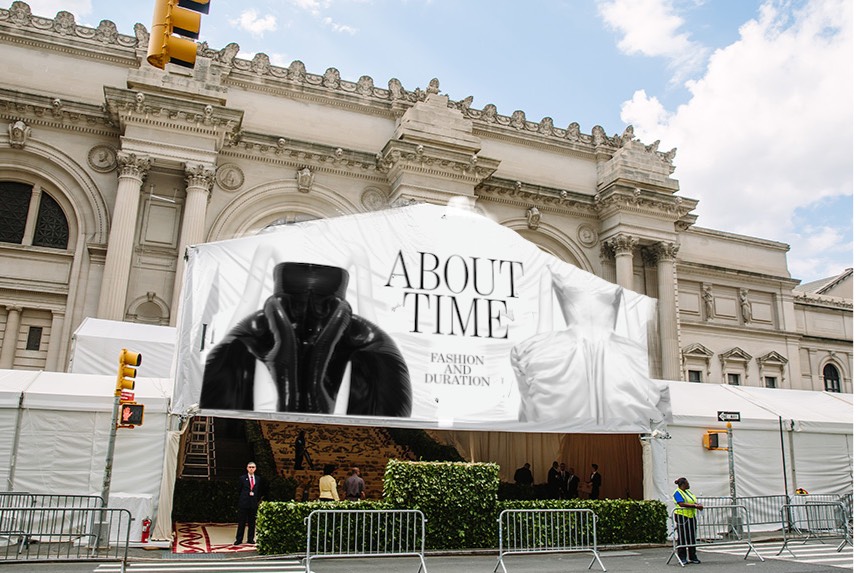 courtesy of the Met

One Sartorially-inclined correspondent — and a former Costume Institute Intern, imagines Monday’s Gala as it could have been

Monday‘s opening of the Costume Institute exhibition “About Time: Fashion and Duration,” celebrates the 150th anniversary of the Metropolitan Museum of Art. An exhibition presenting a chronological timeline of fashion through the decades from 1870 to 2020,  interruptions are added with the works of designers who have riffed on earlier silhouettes and design concepts.

The exhibition—and, as a result, the gala’s guests—trace the history of fashion starting in 1870, but not in a linear sense (some guests dipped back a bit further, most notably the first-Monday-in-May stalwart Sarah Jessica Parker, whose custom 18th C Robe a la Française was by Dolce & Gabbana a la Technicolor™). Designers even opened their own archives, with Tracee Ellis Ross slipping up the stairs in the very same Stephen Burrows dress Pat Cleveland brought down Versailles in 1973. Claire Danes was entrusted by Dior with one of its crown jewels (Venus c. 1949)—her dinner companions didn’t touch a thing.

The exhibition is inspired both by Virginia Woolf‘s body of writing—most exceptionally ‘Orlando’— and a concept from philosopher Henri Bergson called ‘la durée,’ the conception of time ‘that flows, accumulates, and is indivisible.”

Head curator, Andrew Bolton, asks visitors to view time and fashion as both linear and cyclical. Entirely at home were the 1890s Mutton Sleeves Iris Van Herpen 3-D printed for Beyonce, and the 1870s bustled ballgown Zendaya was presented with by Fendi.

Fashion, then, is marked by trends, but it is also timeless—Givenchy’s outing, Monday night, is one that almost made you want to walk by Tiffanys on the way home. Just…to check.