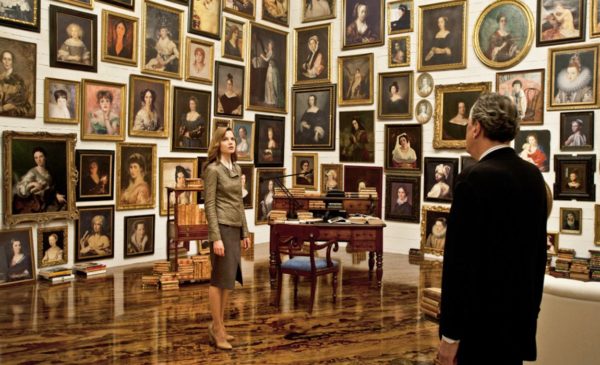 Summer is a notoriously slow season for the art world since everyone is enjoying their time outdoors, going on vacation or drowning themselves in ice cold rosé. The same cannot be said for the winter season, though, as all we want to do is cuddle up inside reading a good book or watching every movie on Netflix. But is it just us, or does Netflix seem short on options sometimes? Scrolling through and picking a movie ends up taking more time than watching the movie itself, so we’ll make it easier for you, art-lovers, to get straight to business with some of the most entertaining and inspiring art-related movies to watch over the winter.

1. Beltracchi: The Art of Forgery

This documentary profiles master art forger Wolfgang Beltracchi with insights into his life, talent and the biggest art forgery scandal in post-war Germany that made him millions.

2. Exit Through the Gift Shop

This 2010 British documentary film directed by street artist Banksy exposes the inside story of street art! One of the most provocative films about art ever made, Exit Through the Gift Shop is a fascinating study
of low-level criminality, comradeship, and incompetence.

3. Raiders of the Lost Art

Raiders of the Lost Art is a documentary series that explores the history of various thefts of art and efforts to recover them. Through rare archival footage, re-enactment, and expert commentary, see how these treasures vanished into thin air, and how many (but not all) have been recovered.

This romantic Italian drama featuring Oscar winner Geoffrey Rush, as well as Donald Sutherland and Jim Sturgess, tells the story of the director of an esteemed auction house who falls in love with a reclusive your heiress. After he shows her his priceless collection of portraits, she soon disappears with all of his paintings.

Renown artist, Frida Kahlo is depicted in this biopic drama film celebrating her as a bold and uncompromising political, artistic, and sexual revolutionary. Salma Hayek received Oscar, Golden Globe and BAFTA nominations for her portrayal of Frida and the film won two Academy Awards for Best Makeup and Best Original Score.

Directed by Oscar winner Kevin Macdonald, the film tracks Cai Guo-Qiang’s spectacular pyrotechnic displays told through the artists’ own words and those of family, friends and observers. More specifically, the documentary examines why he engineers artworks like his incredible Sky Ladder, a 1,650-foot ladder of fire climbing into the skies above artist Cai Guo-Qiang’s hometown.

A documentary film done in celebration of Carmen Herrera’s 100th birthday, her story is just one example of the many great artists whose accomplishments were overlooked because of their gender, ethnicity or nationality. “The 100 Years Show” demonstrates the power of artistic vision to sustain itself. Once you’re done watching, head over to The Whitney Museum to check out Carmen Herrera: Lines of Sight which was just extended until January 9th.

Inside Look at BIO:DIP At Red Bull Studios in New York