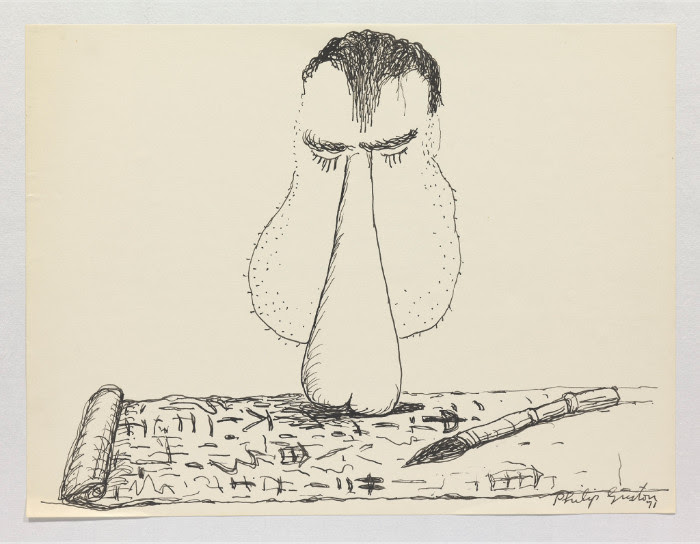 Beginning 1 November 2016, one week prior to the general election that will determine the 45th President of the United States, Hauser & Wirth will present ‘Philip Guston: Laughter in the Dark, Drawings from 1971 & 1975,’ an exhibition devoted to the renowned late artist’s satirical caricatures of the 37th President of the United States: Richard Nixon. Featuring some 180 works depicting Nixon and his cronies, the exhibition includes Guston’s infamous Poor Richard series and brings together over 100 additional drawings and one painting never before been seen by the public. The exhibition marks the first time this entire body of work has been presented to the public at large.

In the newly exhibited works from Guston’s sketchbooks, visitors to the exhibition will get a closer look at the artist’s working process and the development of his imagery. They can study Guston’s parodies of the President’s humble upbringings and dirt-poor youth in the drawing of a locomotive engine billowing with black smoke. As the train departs from the ocean waves and exotic palm trees of the California coast, it reminds us of Nixon’s determined path toward early political success. To complete the dramatic scene-setting Guston borrows the phrase, ‘It seems like an impossible dream…’ from Nixon’s 1968 Presidential Nomination Acceptance Speech at the Republican National Convention, and memorializes it in clouds. In sketches where Nixon himself is depicted, Guston exaggerates anatomical attributes, notably Nixon’s famous 5 o’clock shadow, defiant gaze, swollen jowls, and ever-growing nose. Nixon’s ‘schnoz’ is rendered as phallic morphology, becoming a visual cue for Guston’s condemnation of the President’s obscene deceits.

On view through 14 January 2017, ‘Philip Guston: Laughter in the Dark, Drawings from 1971 & 1975’ is co-curated by Sally Radic, of The Guston Foundation, and Musa Mayer, the daughter of the artist. The exhibition is the first to be presented in Hauser & Wirth’s new temporary space at 548 West 22nd Street. The exhibition is accompanied by a brief chronology that serves to remind viewers of the ‘highlights’ of Nixon’s career.