Cruel and Unusual Comedy: Astonishing Shorts from the Slapstick Era 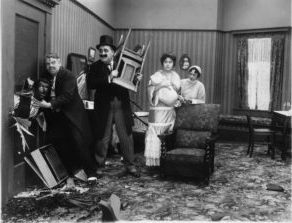 The Roy and Niuta Titus Theaters

From its first appearance in May 2009, MoMA’s Cruel and Unusual Comedy series has explored the vast subconscious that is American slapstick comedy of the early 20th century. These unruly, unpretentious short films were made to be instantly consumed and quickly forgotten, just one component of the many that once made up an evening at the movies. The filmmakers flung themselves heedlessly into a wide range of discomfiting social, cultural, political, and aesthetic topics, including ethnic stereotypes, domestic abuse, sexual identity, violence, and even the plague of Chaplin imitators. Like today’s stand-up comedians, the eccentric comics of the 1910s and 1920s found their material in the anxieties of the moment, and their work reveals, for better or worse, an America often hidden in the more polished feature films of the period.